This visdev image landed me the first commercial I ever directed, back in 1993 at Colossal Pictures. I can’t remember if we competed with other studios for this spot, or if the client had already decided on Colossal, but it was the classic advertising-biz story of “We want it to look like a Bentley but cost like a Hyundai, and we need it yesterday.” 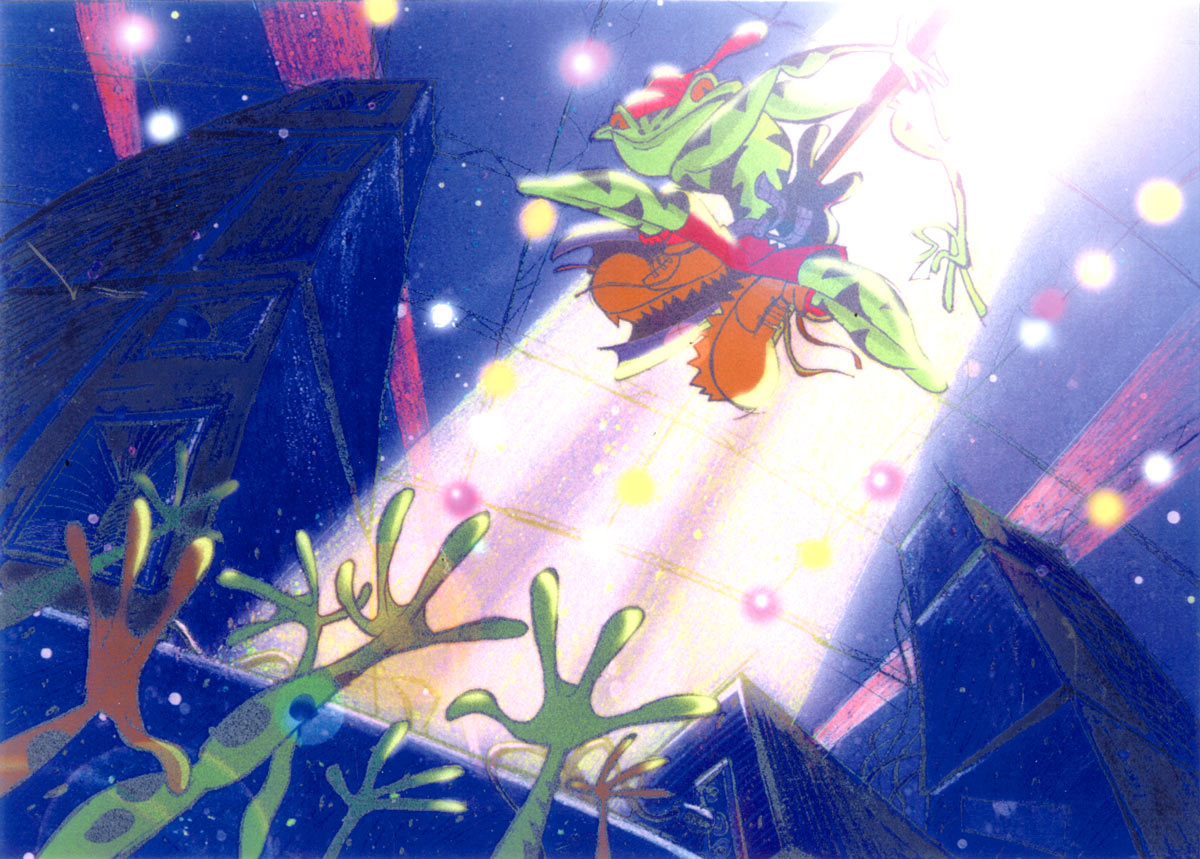 The agency clients were attracted by work on the Colossal Pictures demo reel directed by Mike Smith. Specifically, the complex lighting effects in his spots for NIKE, which they felt might fit their ad set at a rock concert (for a Canadian snack food). However, the technique they liked was far beyond their budget, and besides, Mike Smith was either unavailable or uninterested.

..so they got me instead.

I tried to pack as much info into my storyboard as I possibly could, including a colour script. Thankfully the client liked it, and then we were off, with 8 weeks to deliver the finished spot. Back then, it took about 12 weeks to complete a fancy animated commercial with all the bells and whistles, like the clients wanted; animated on ONES, on 16-field paper, layers of shadow & highlight mattes, shot in multiple camera passes, some of them with diffusion, and elaborate multi-pass camera moves (called bipacks).

To save time & money on this spot, it was animated on twos, on regular 12-field paper, there were only two shots that used bipack camera moves, and the rest were done in-camera, and we ditched the shadow pass and just burned in highlights with ONE extra camera-pass. But thanks to the fantastic work by Carter Tomassi (Colossal Pictures’ head of animation camera) we managed to get a great, deliberately grainy, hand-held concert footage look (Carter spent many years as a real life rock photographer, so he knew exactly what I was going for). I’m ashamed to admit it, but it was only when working with Carter Tomassi, that I finally realised how much value a creative camera person brings to animation. In fact, Colossal Pictures was the studio that taught me that anyone on the project can elevate the material, as happened every day in every department of that powerhouse little creative studio.

One of the great things about directing a 30 second commercial was doing all the aspects of animation that I love. Being able to design the characters, draw the storyboards, and all layouts, and some of the animation too (Tony Stacchi, Simon O’Leary & Garett Sheldrew animated other scenes). This multitasking was tiring sometimes but exhilarating always, and what I most liked about working at small or mid-size studios where animated commercials tended to be done, and generalists are welcome. Bigger studios frown on artists ‘wearing many hats’, and we must choose ONE role in the pipeline, sadly.

When we finally had the animation drawn & tested, cels inked & painted, and the whole shebang shot on film, producer Jenny Head and I flew to Toronto to deliver the spot to the ad agency client and sit in on the final post-session. I remember the agency art director & writer were very happy with how it all turned out, but the owner of the agency being sour about the spot not being a Bentley, which was very true. But he did get a tricked-out Hyundai; RIFFS: “Hip Hop”