Earlier this month, Julia and I spent a pleasant week on the island of Santa Catalina, where we both did a lot of sketching. I wasn’t able to finish all my sketches on site but finished a few at our hotel on the island (and the rest at home). I finally scanned them all: 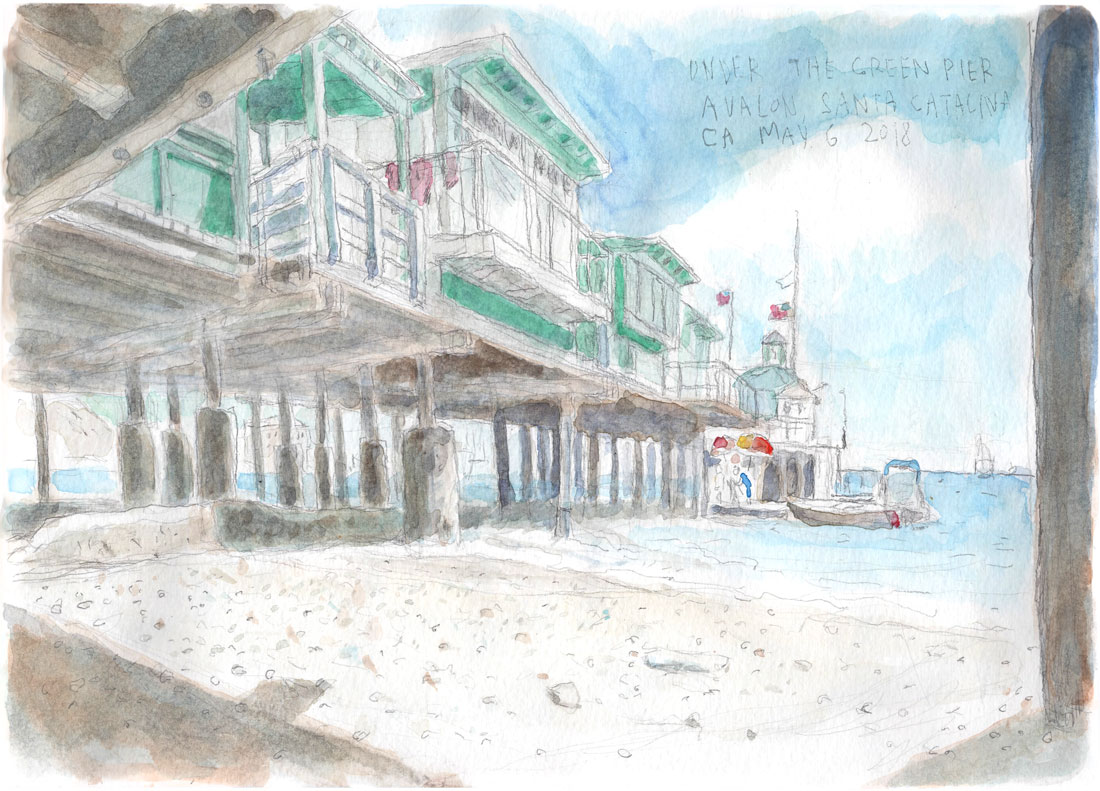 Though the weather was always sunny it was quite a bit cooler than nearby Long Beach, only an hour away by ferry. We stayed in a hotel on the waterfront in Avalon, one of only two towns on the island, with great views of the iconic Green Pleasure Pier.

In the 1920s/30s heyday of Catalina there were two such piers, delivering vacationers from the mainland, but these days half the sightseers are deposited by cruise ships anchoring offshore. The island was bought in 1919 by William Wrigley (the Chicago chewing gum guy) and he developed the island as a vacation resort, and place for his Chicago Cubs to do spring training.

A playground of Hollywood stars long ago, Catalina’s biggest town Avalon is mostly for the Jimmy Buffet hoi poloi these days. The bay is dominated by the Catalina Casino, and the word ‘casino’ is not used here in its Vegas usage but in an older meaning, as a meeting place for people to have fun, which in this case was to dance and watch movies (not gamble). We learned all this during a tour of this great old building.

The beautiful old cinema on the ground floor was apparently the first cinema ever built specifically for ‘talkies’, which were the latest thing when the casino was built in 1929. Above the theatre is a massive dance floor where all the big bands of the 20s-40s came to play live for as many as 1200 dancing couples. The cinema is still in use, and while the ballroom isn’t used for nightly dances anymore, it is often used for private events.

Getting around the island is expensive; it cost $45 an hour just to rent a little golf cart. A few day trips to sketch & picnic would get very expensive very quickly at those prices (and put a lot of pressure on the sketcher!) so we abandoned early plans of driving to sketch further afield, and confined our attentions to anything walkable within Avalon. 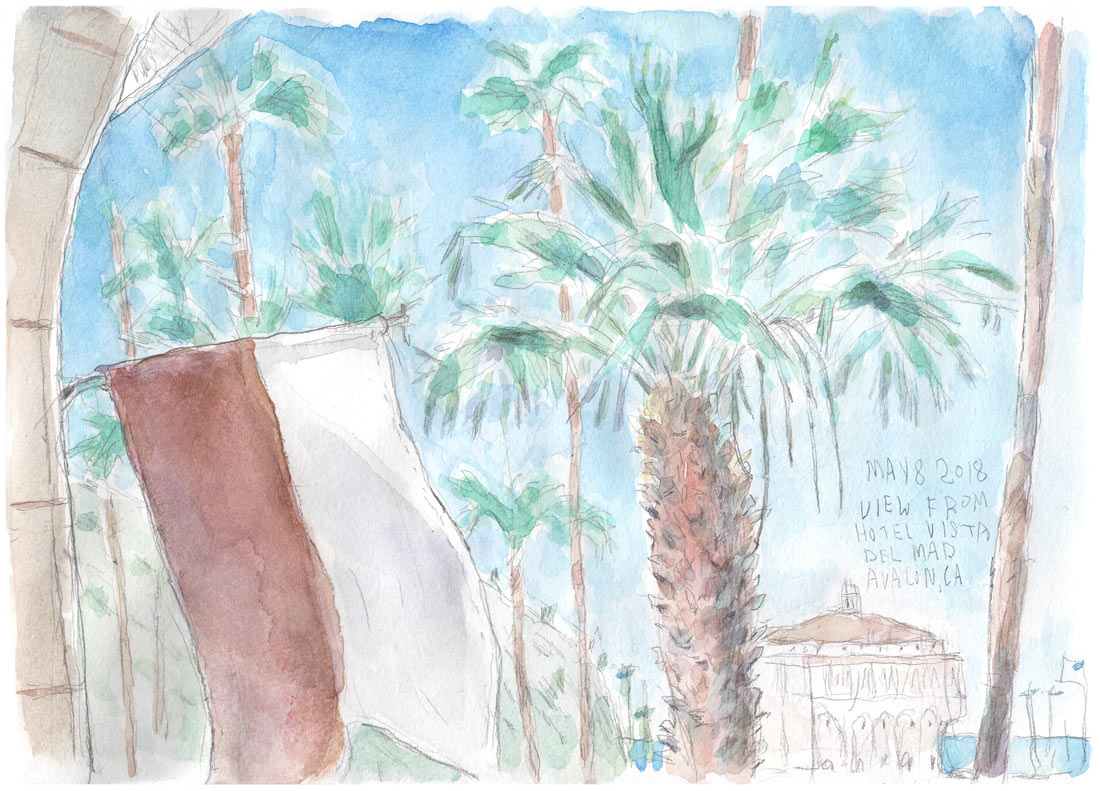 Thankfully, there were plenty of scenic things to draw right close by nice places to eat & drink, and fantastic views from the balcony at our hotel. 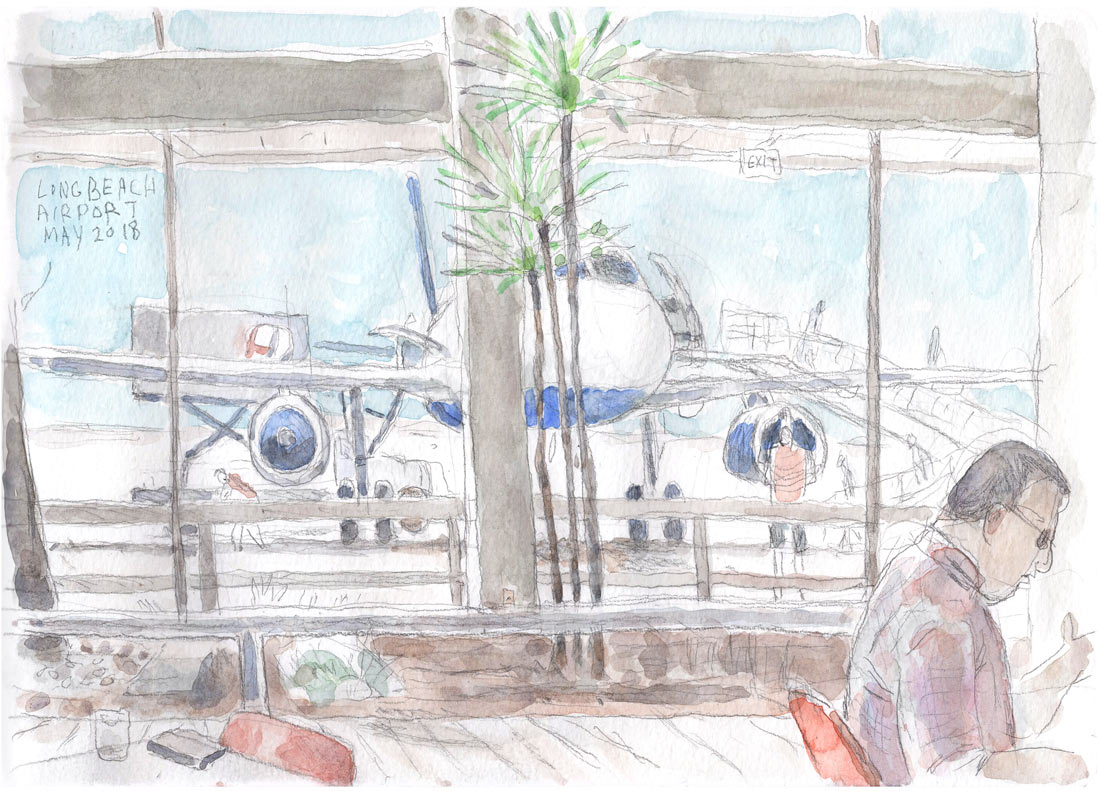 Our trip back home to San Francisco was delayed, allowing me time to doodle a view from within the very pleasant Long Beach airport.