When I was in grade two of Catholic primary school, we started to take catechism classes where such profound notions as ‘Souls’ and ‘Immortality’ were being bandied about, not to mention the biggies; ‘Heaven’, ‘Hell’ and ‘God’. Both in the classroom and out in the playground, there was much discussion about these concepts and the ground rules that went with them. This was all a part of the build-up to our First Holy Communion. 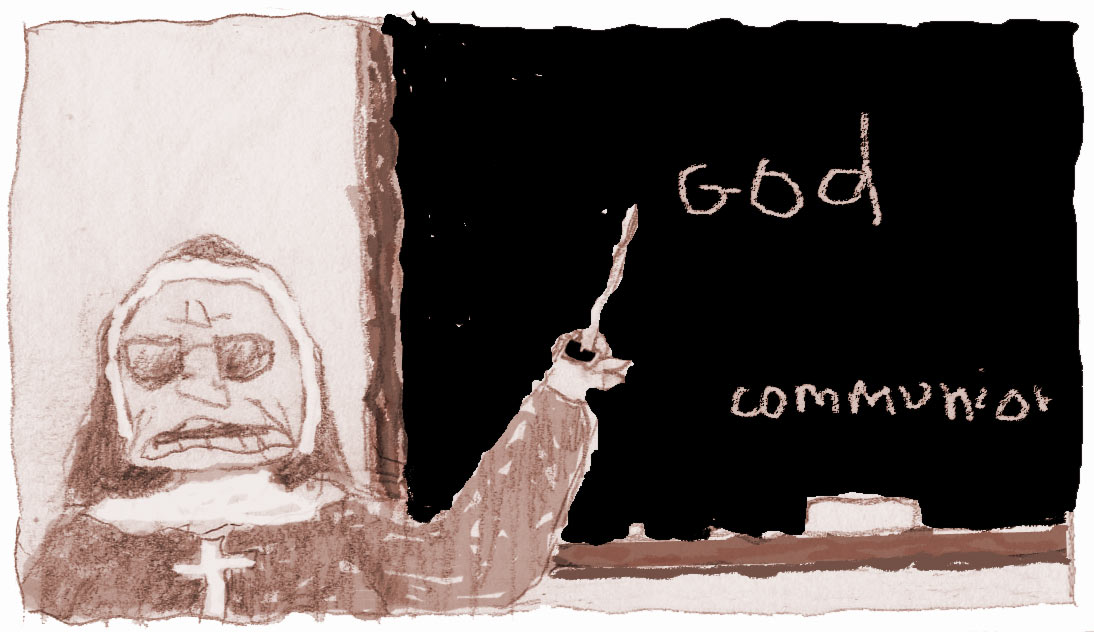 An old war-hammer dressed in a veil known as Sister MT (who was old enough to have taught my Dad as a child, in a bygone age) was the person chosen to lead this little group of wide-eyed 8 year olds into the spirit realm. Her prime qualifications for this delicate mission were that she was a nun and breathing. Apart from those two admirable qualities I could not imagine a person less qualified to introduce the subtle and complex world of the afterlife and its mysteries to such an impressionable group of young minds. In today’s lingo we might say that she lacked ‘people skills’ or ’emotional intelligence’.

It was taken as a given that Heaven existed and was a place that we all wanted to go to, and Sister MT explained that requirement Number One was a soul, no one was getting past the guards into this exclusive paradise without one of those. Thankfully though, we each got kitted out with a soul at birth by the grace of God and not only that, thanks to our parents we were also Baptized which was requirement Number Two. So far so good. But apparently the Baptism wasn’t really sealed until ratified with a new pledge made of our own free will, which brought us to step Number Three; preparations for our First Holy Communion, and where we were on that particular day.

Many people at this point in their spiritual development may wrestle with the exclusivity; what about the un-baptised? the Hindu? the Moslem? Or even what about the Atheists? My mind didn’t stretch that far at the age of 8 partly because I didn’t realize that anyone other than Catholics even existed. I had never met one (that I was aware of anyway). No, the big hurdle for me in this whole HEAVEN caper was, what happens to my dog JOCK?

I remember right there in class counting off all the people I cared about the most, my family, my friend Stephen.. and everyone except my dog Jock were covered by the rules we had learned so far. I was pretty sure that nobody had ever baptized Jock, after all, we had only picked him up at the pound not so long ago, and if they hadn’t baptized him there how was he going to get in to Heaven? Jock may or may not have been my number one favourite person on planet Earth at that time (please don’t force me to pick) but let’s say that if I had to choose 10 people to rescue from the fires of hell then Jock would have DEFINITELY been on the list, and I couldn’t imagine Heaven being heavenly without him.

So, I wanted to find out what I needed to do to get my dog Jock baptized, so I could then get him his communion and he could get to heaven too. I put up my hand and when she stopped to acknowledge me, I asked Sister MT that question. Unfortunately for me, it was not an empathetic, spiritual guru I was talking to that day, it was the angry drill sergeant from ‘Full Metal Jacket’.

The specifics of her actual response escape me now, just as the moment of a bomb detonation later becomes hazy to those who stood at ground zero.. but it was fiery and contemptuous, laced with an undertone of ridicule and an aftertaste of acid. Sister MT made it quite clear that Jock, nor any other dog neither, didn’t have a soul and that as a consequence of this design by The Maker, Jock was denied entry to Heaven.

To say I was ‘stunned’ doesn’t describe it. I was devastated and then crushed, turned inside-out, then peeled like a banana and then after all that yeah, I was stunned… It was a pretty big existential crisis that’s for sure, certainly the first time that some crumminess in my own life was indicative of a system-wide, stacked-deck throughout the entire universe.

I know, I know… I didn’t even think of all the other stuff, like if heaven is full of Sister MT type people do you really want to spend eternity there? That thought did occur to me much later on, but at this point in my life I was operating under the assumption that Heaven was marvelous, we were all going and my dog Jock, who I loved, wasn’t allowed in. To any devout atheists out there, I understand that this Catholic-stuff is hard to grasp but to understand my state of mind back then you need to think of this scenario:

‘Yeah, we are all going to this awesome party, wanna come? No, your best friend isn’t invited. In fact don’t even ask about him, Ok? just asking about him makes us think that you aren’t cool enough to come too and we should invite someone cooler. And by the way, anyone NOT at the party is going to be incinerated… coming?’

Anyway, I no longer remember what exactly happened immediately after this devastating spiritual mauling. I may have tearfully rushed home after that class was done with. Or, I may have stayed in school like a zombie for the rest of the day till all my classes were over… that part I am now unsure of. The sequence of the memories I have left flows like this:

1. I’m at school learning about souls.
2. I am skull-raped by a nun (see above).
3. Next, I am tearfully trudging home like some tiny existential philosopher poet, with the weight of a cruel, twisted universe on his narrow shoulders, each step heavier than the last.

The next well-remembered scene in this tragic screenplay is that I am at home, sitting on our back step, clutching my dog Jock to my sobbing bosom with both arms, bawling and blubbering and rocking him to and fro, as if to shield him from the inky oblivion that was his sole birthright. The only English words that Jock understood apart from his name were ‘sit’ and ‘shake’ but he knew enough body-language to see that something pretty heinous was afoot, and he sat there patiently letting me wail myself into a frenzy, occasionally licking some of the blubber-snot off of my face, and doing what he could to comfort me, wagging his tail and so on. 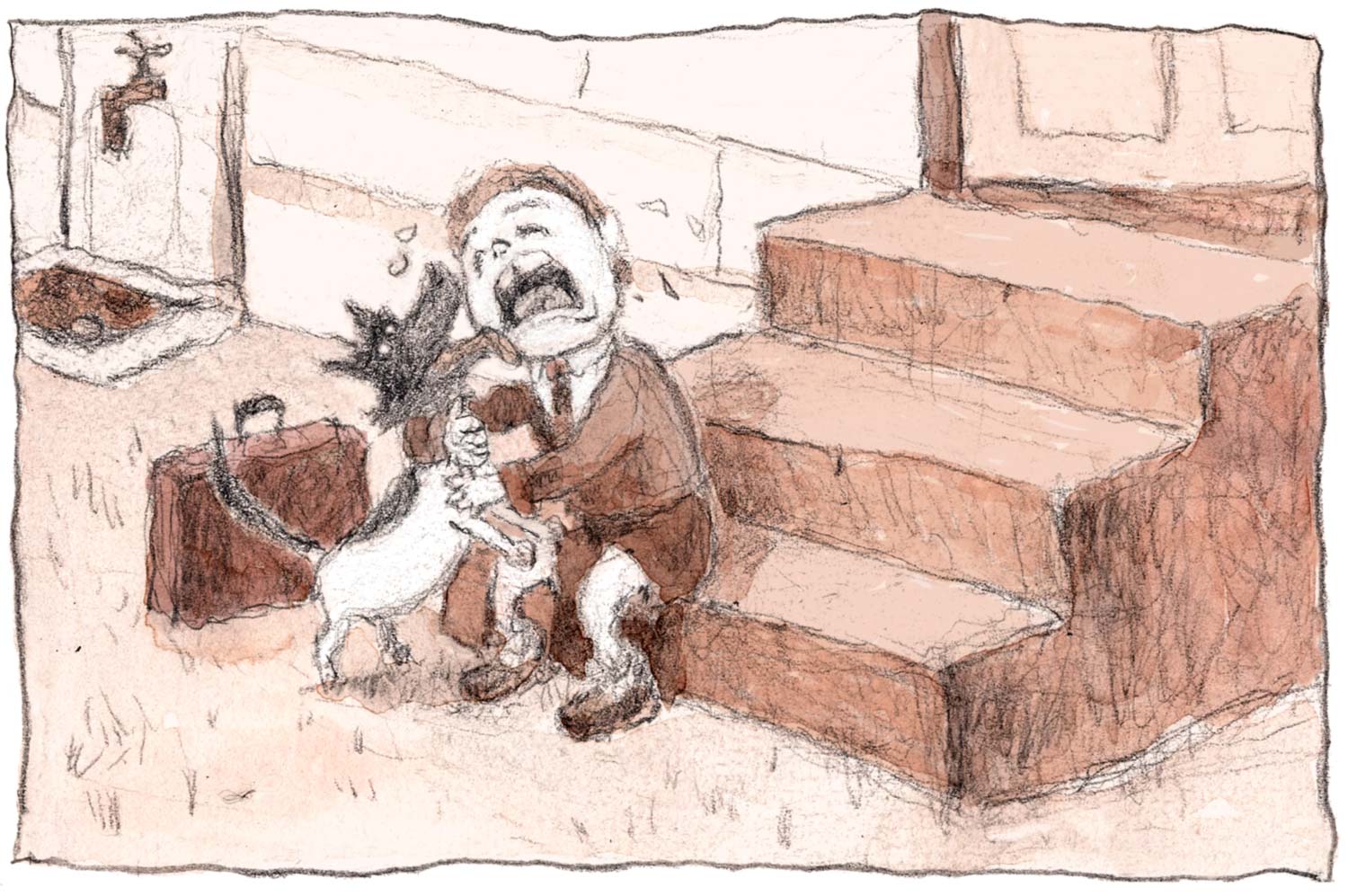 The scene is touchingly funny to me now, sitting here, writing this and remembering it all from the vantage point of an adult well over 40 years later, and especially from the further distance of being at the atheist-end of the agnostic-spectrum (which is to say that I don’t really know what I believe any more). But I still remember the emotions from that moment, the despair and hopelessness, the anger at the cruel injustice of it all. I was wracked with anguish on that day. Whatever the nun might say, Jock was very much a person to me and I held him to me tightly. So this is how my mother must have seen me from the kitchen window.

She came outside and sat next to me on the back step and tried to get to the bottom of what was going on. Through wrenching, full-body sobs and gasping intakes of air, I tried to explain to her the cruel sham that was going down; The incompetence of the universe, the twisted coldness of it all, I didn’t want to go to heaven if Jock wasn’t going to go too, and the Sister said he couldn’t, and why didn’t God make him with a soul and.. and.. all that stuff… There just wasn’t any way around this problem.

Consider my Mum’s predicament here; she would have been deeply peeved that I had been so callously treated, but she probably didn’t want to openly contradict the nun who had reduced me to tears by saying that my beloved dog would not enter Heaven. Besides which, Mum may have even agreed with Sister MT’s No Pets policy, who can say? At the same time, she was a compassionate person and not too busy to see that a child’s problems are sometimes the very biggest issues of all, such as on that particular day, when the big question was this; do we live in a Just Universe, or not? The little person that I was back then was having his universe cracked open on the back of this very question.

Mum knew that sometimes saying nothing, but just being there with a hug and some simple reassuring sounds, was all that it took to cheer someone up. But if they moved beyond misery to despair and the situation called for something insightful to be said, she was equal to that task too. She reassured me that Jock would indeed be going to Heaven. To which I wailed that the Sister explained the rules and it just wasn’t going to happen. Mum said that the Sister was explaining the rules for HUMAN Heaven, Jock is going to DOG HEAVEN. My blubbering stopped.

Dog Heaven? (Says I). Why yes, it’s right next door to Human Heaven, (Mum says) and on Mondays, Wednesdays, and Fridays we can visit them, and on Tuesdays, Thursdays, and Saturdays the dogs can visit us! (Sundays, everyone has the day off).

All in a trice, the burden was lifted and the universe was a benevolent place once again. We would BOTH go to heaven, one each, side by side! My mind raced with the possibilities.. Why, here at our house, didn’t Jock sleep outside, under the tank-stand while I slept inside the house in my bed? Yet we played together just fine didn’t we? (not to mention the fact that he snuck in my window each night and ACTUALLY slept on my bed, when no one was looking). I felt that a similar arrangement could be possibly figured out in Heaven. Wonderful!

Did my Mum cook up ‘Dog Heaven’ and its universe-changing, philosophical, get-out-of-jail-free card on the spot? Or did we together workshop the concept and all its rules, perhaps over the next few days of excited mother-son conversation? I don’t remember, but thinking about it now, it seems likely. Memory is a slippery thing. I only know that in the memory that comes down to me across the years, the metaphysical idea that made me once again happy to live in the universe was hatched right then and there on our back step by my Mum. 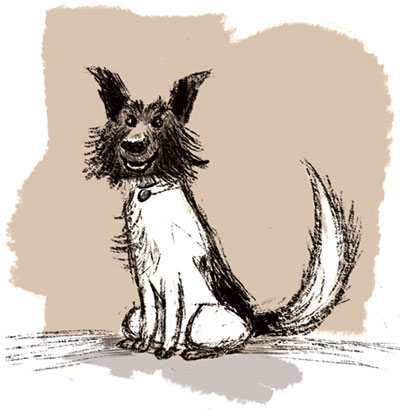 This is a bittersweet and happy/sad memory for me. Two of the beings that gave me the most comfort in my childhood are intertwined in this memory, and there are so many layers and threads to it; my feelings from the time and my feelings towards their memory now, based on the fact that these two were both taken away from me, many years before I was done with either of them.. though not before they each gave me so much.

64 Responses to “Dogmatic vs Dogcentric”