Having been labelled pretentious for posting about Fellini, (and by an Italian no less) I’m now in tactical retreat back to lowbrow territory with a post about comics. Specifically Wondercon 2006, (AKA: the Nerd Prom) which I exhibited at this last weekend.

When exhibiting at conventions, Nerve Bomb international has been affiliated with the Abismo multimedia giant for the past few years. However on this particular occasion, Abismo CEO and CFO Mr Rhode Montijo, was attending to urgent affairs abroad, and so the fabulous Ms. Michelle Ritchie came along to move product in his stead.

There was a great reaction to the advance copy of Rhode’s latest book, CLOUD BOY. It was a tractor beam; stopping people in their tracks and reeling them in with its magnetic powers of cuteness. Everyone familiar with Rhode’s oeuvre agreed that this book is a huge creative breakthrough for him, because although it continues his focus on cute characters, this one doesn’t get murdered, mutilated, maimed or mauled by the end of the story.

Sales of Nerve Bomb titles were lower than last year, even though Saturday was so crowded that potential attendees were turned away at the door. I assume that my entire customer base was amongst those turned away. It has always been a mystery why sales are better some days than others. The calculus of sales are influenced by so many factors: attendance, booth-placement, booth-layout, sales-pitch, quality of display, quality of material and whether I have a shitty look on my face, or not.

But for me the cons are not only about selling my books (just as well, eh?). I also go in order to buy other stuff and to socialise, not only with people I get to see around town (such as Nate, Ted, the Ghostbots, the Maverix, Enrico, Ronnie and Tess), but all kinds of fun, cool, and crazy folks that I don’t see anyplace else but at cons (such as Mark and Anne, Ragnar, George, Amelia, and others). Where else can you chat with Spiderman and his Dad?

Although he was away for the con itself, the night before the show Rhode morphed into a Roadie, and helped setup the Abismo/Nerve Bomb booth, which is when we met the folks from Steam Crow. Thankfully, they took this photo (below) that provides documentary evidence that Rhode was physically present for at least part of Wondercon 2006. As you can see in this pic, Daniel is ready for action and that pumped up ‘tude is evident in the Steam Crow art and their fine booth display. The booth especially so, considering that this was their first show. I still haven’t got a nice vinyl banner, after a few years doing these things…

Socialising got off to a great start this year when I found out that we were sitting next to Rafael Navarro (who is also in that category of good friends who I only see at cons). This year Raf introduced me to some of his cronies, Mike Wellman and Joshua Dysart. The three of them lounged around like lazy rockstars strumming guitars, while waiting for their hangovers to wear out, occasionally leaping up to serenade any passing ladies with a pitch about their comics, and then languidly slouching back in their chairs again.

On the Friday evening a whole gang of us (including Mark and Anne, Rafa, Mike, myself and more) went out for Hunan Food. We managed to find a table that would seat about 10 of us in a place (the always good “Henry’s Hunan”) that would tolerate our loud, obnoxious conversations about a broad spectrum of assinine subjects.

Ms Monster and the B-minus crew graced me with their presence at my booth, (for photo evidence, see below) and I got to feel validated by their cool a few times during the weekend. Also I had quite a few fun and interesting chats with people who’s names I didn’t catch; just people who bought something and stayed to talk for a while, and that was a really fun aspect of the show for me this year. So thanks a lot to all you folks for coming by.

Early one morning, before the doors opened, I got talking to Stuart Ng at his booth. He told me of his recent trip to the Angouleme comics festival in France, and his meetings with the artists and publishers there. I droned on about European graphic novels and my desire that more of them would be translated into English and distributed more widely in the English speaking world. To thank Stuart for patiently tolerating my bending his ear, I then bought almost my entire swag of stuff from his booth… As I said before, buying books was on my list of things to do. So without further ado here is…

“Claire de Nuit” is by one of my favourites, mr Jordi Bernet. This is a French collection of his strips about a cute streetwalker (“Clara de Noche” in the original Spanish) who is reminiscent of the pinup icon Bettie Page. (in English translations the character is called “Betty by the hour”). The art style is more cartoony than Bernet uses in other titles, such as “Torpedo” and the drawings are so full of appeal that he makes hooking seem wholesome and fun, so this book requires a lot of suspension of disbelief and certainly isn’t for everyone.

“Tao Bang” is an epic comics series that feels like an over the top fantasy film. The formula for a Gomer piece of popular culture is, any two fanboy obsessions plus sexy girls, so the recipe for this book is: pirates+dinosaurs+sexy girls=Tao Bang. The artwork is a superb collaboration between Fred Blanchard and a fellow I once worked with, the super talented Didier Cassegrain. Years ago, at the Paris Disney studio, he would distract the rest of us layout artists with his drawings of beautiful girls (usually featuring curvacious bottoms).

“les Lumieres de L’Amalou” by Claire Wendling. I’ve had my eye on this series of beautiful comics albums for a while, looking through the pages at cons before, but the cost of all 5 seemed exhorbitant. I finally broke down and bought the BIG album that collects the series. It was expensive but well worth it, as the art is simply amazing, page after page. Plus, at the slow speed that I read French, I have reading material to last me a year, so it wasn’t expensive at all, if I look at it like that… (rationalising guilty pleasures is one of my super-powers)

Without question Wendling is one of my all time favourite artists and she has exerted her influence on many others as well, including an artist I had never heard of before, but whose brilliant work I became acquainted with at this year’s Wondercon…. 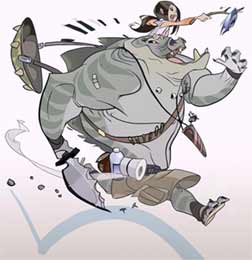 “AYANIMEYA”, the beautiful colour sketchbook by Alina Urusov, was the prize find of the show for me this year, and I recommended it to everyone that I could. The range and depth of her drawing skill immediately blew me away, but when I found out that she is a recent graduate from Sheridan college and is about 20 years old, It didn’t only blow my mind; It made me want to blow out my brains. But I quickly thought better of that particular plan, instead, I went home broke all my pens and pencils, threw my art supplies out the window, then set my portfolio on fire and danced around it in the nude, wailing and gnashing my teeth.

I’m hoping that in exchange for this ritual sacrifice, the gods of drawing talent will finally send me some… If not then I guess I’ll just have to do some more sketch practise…