I recently found a pile of sketches that I drew when I was living in Tokyo. Back then I often doodled what I saw, perhaps because everything was so new to me and I had a lot of time on my hands, living in a vast, complicated metropolis where I didn’t know many people and couldn’t really communicate very well with most of those few people who I did know. 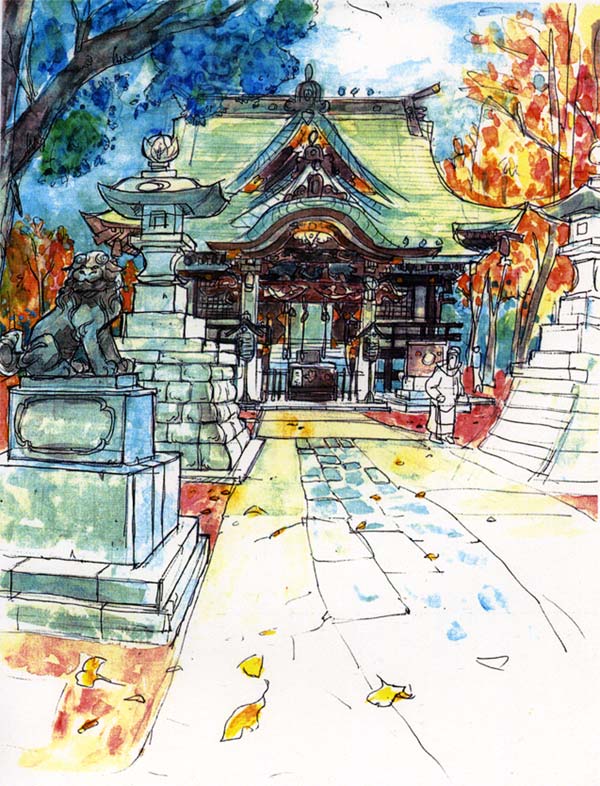 My interest in going to Japan had developed without any clear idea of what to expect. When I arrived in Tokyo I was blissfully unaware of anything about the place, including what it even looked like. Arriving with no preconceived notions whatever made those first impressions of Tokyo very powerful indeed. I remember seeing the modernity of Tokyo’s SHINJUKU area for the first time. Like a lot of other Westerners who arrived there in the mid 1980s, the only thing in my experience that I could compare it to were images from Science Fiction movies that I had seen. The density of the crowds, the modernity of the architecture, the visual noise of the neon-lights, the giant TV screens on the sides of buildings and the buzzing efficiency of the place were like nothing I had yet experienced. It amazed me that I had not heard of this place before I had visited it myself. I had vivid mental snapshots of Times Square, and Piccadilly projected inside my skull before I ever set foot in those places. Impressions formed not only from TV and movies, but also from conversations with friends who had visited them. I knew a ton of people who had been to London but had only met two people who had actually been to Japan before me… and why hadn’t they told me about GINZA? Or SHIBUYA? The first I knew of all these places, I was standing neck deep in their amazing spectacle.

Tokyo is a remarkably ugly city, and especially so given the fact that the people who live there are very much concerned with the appearances of things. But maybe “ugly” isn’t the right word, perhaps “disorganised” is better? But even that word shows up the paradox, because the Japanese are rather concerned with order as well, though apparently not when it came to the building of Tokyo. Right around the corner from where I lived was a bubble-gum factory, which was next to a school, next to an apartment next to a Temple. If there are zoning laws in Tokyo I can’t imagine what the restrictions must be… 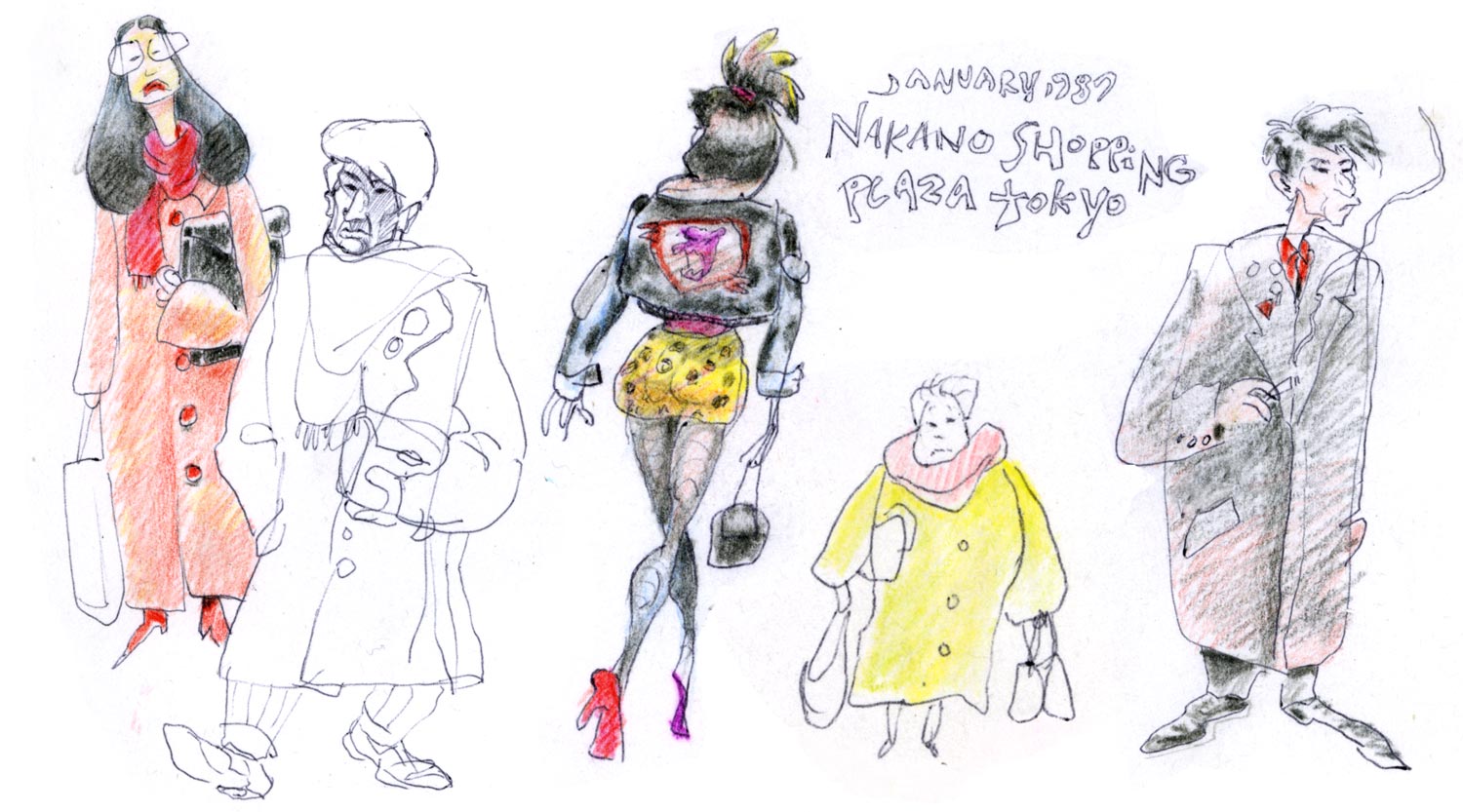 For that reason it is a delight for modern architects. A Swiss architecture student I met one day, as I walked about the back-streets, opened my eyes to that fact. He had only come to Tokyo to see the buildings of Kenzo Tange and I used what little language and navigation skills I had acquired to help him find Tange’s church. Unlike me, I don’t think the Swiss guy cared much for Tokyo, other than the buildings. He kept asking me “Vhere are zee prOstitUtes?” I had no idea. My budget didn’t run to such things. 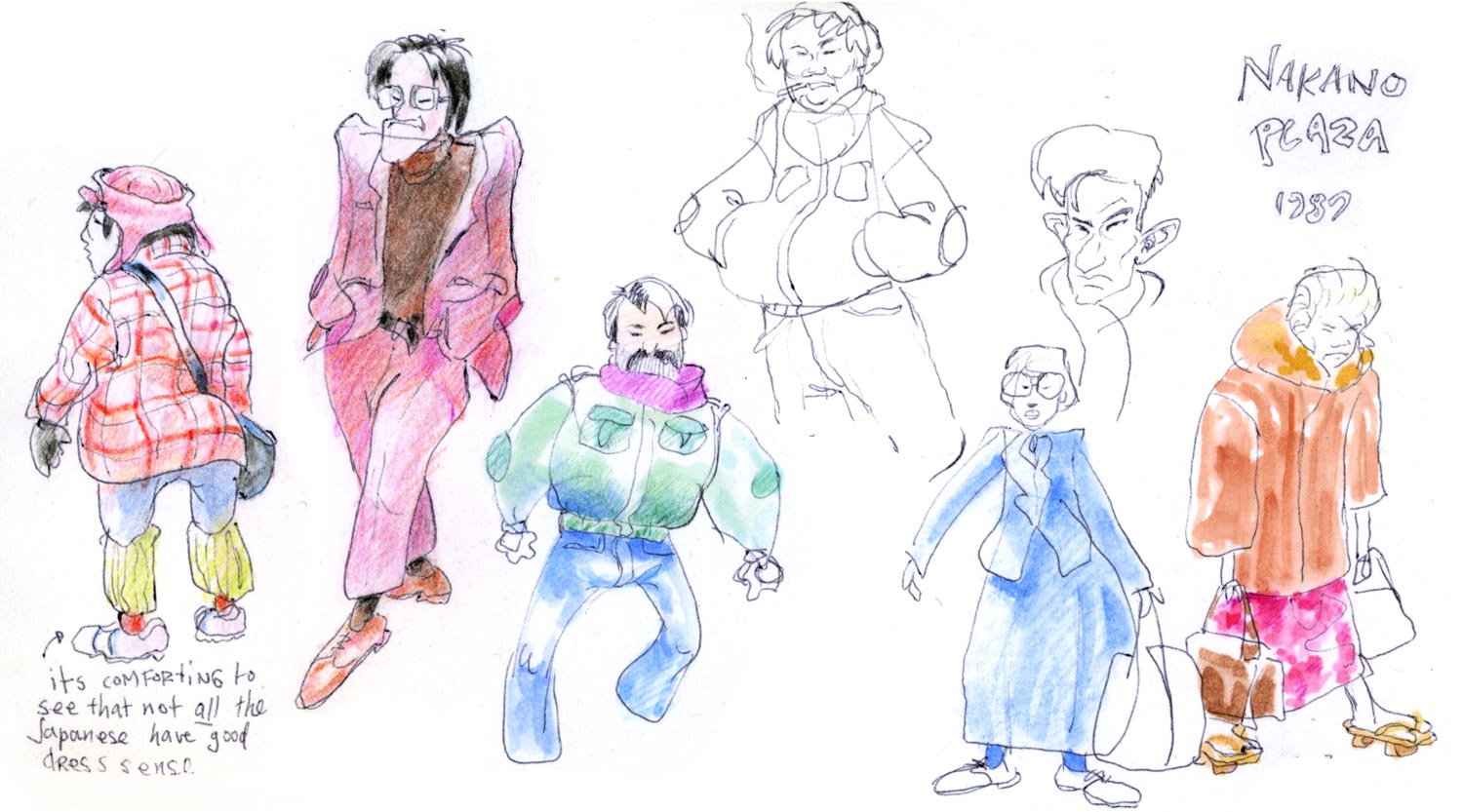 Ugly or not, Tokyo is a fascinating city to spend time in. Its wiggly streets noodle out all over the place, full of little nooks to explore, but newcomers learn the way to and from their daily haunts by rote, afraid to stray from the familiar path that they have hacked through the eccentric and tangled jungle of buildings and lanes. That is how I was at first. Later, I stumbled off the routes that I had known and often discovered that one block over from the path I had taken daily, there was a whole other world. Funny little shops. Themed cafes and restaurants. Weird buildings… and charming juxtapositions of things you wont see in any other city. There isn’t a better metropolis in the world to let yourself get lost in, which is just as well, because getting lost is very easy to do.

It is probably true to say that Tokyo is a difficult city to make friends in, though I did make a few, and acquaintances I made a-plenty. Sadly, I have lost contact with the Japanese people I knew back then, though I’ve managed to stay in touch with one or two of my foreigner pals. The subject of how hard it was to make friends in Tokyo was a common topic of our conversation. Some people would read a lot into it but It didn’t bother me, or even surprise me. I take it for granted that it is difficult making friends in any big city. Add to that a few other factors, such as not being able to speak the language, or the fact that the Japanese don’t traditionally entertain in their homes, and the GAIJIN can feel a bit left out.

In any case, none of that worried me… maybe it would have if I had spent more time living there, I don’t know… The truth is, I never felt connected anywhere, even in the place I had come from. At least in Tokyo I had an excuse for my alienation; I was an Alien! (We gaijin had to carry a finger-printed ALIEN ID card. I wish I had it now; what a souvenir!)

Sketching Japanese life was something I only did in those few still spaces here and there; parks, coffee shops restaurants and trains, but when I was on the move, which was most of the time, I took about a million photographs. I am so glad to have both the drawings and the photographs now, as a record of the the very happy years I spent in Japan. Mostly, it is only after some time has passed that I am able to look back on a certain time and realise how lucky I was to be there at that specific time and place. However, when I lived in Tokyo I was smart enough to realise that I was enjoying myself in the moment. I’ve only had that clarity a few times in my life and perhaps Tokyo was the first time. It is a great feeling to know that you are in the right place at the right time, at THAT time. I always get jealous when I hear that someone I know is going to Tokyo, in a way that I don’t when people go on trips to other places that I enjoy… I am not sure why that is so… another mystery is why I have let 10 years pass by since I last visited Japan…

Perhaps it is time for me to go back for a visit? (More Tokyo sketches here)