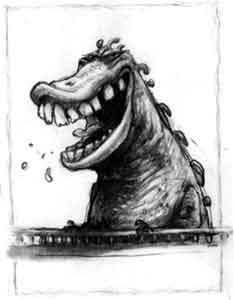 My old pal of many years, TONY STACCHi finally bowed to all the nagging, and now has a web presence, so drop by and have a look at his new website. The site isn’t completely built yet, but there is already a tasty sample of his work on there to look at. Though a long time resident of the Bay Area, he is one of many of my pals who has recently moved away. (I am suffering from a severe depletion of my posse lately *SNIFF*) Tony now lives in LA, where he is Co-Directing a CG film (with Jill Culton of PIXAR fame) for Sony Imageworks called OPEN SEASON. The crew also includes one of my all-time animation heroes; the Mighty DAVE FEISS, who is running the storyboard department. So brace yourself for lots of craziness, but in CG. Carter Goodrich is also involved in the character design, so what with one thing and another, there is certainly lots to look forward to in that project.