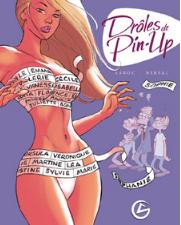 I recently aquired two beautiful books from France. The first is called DROLES de PINUP by HERVAL, who is one of the artists whose work you can see in the latest FLIGHT anthology. I became familiar with Herval’s work through image posting forums, mainly the Drawing Board. He became one of those few artists whose image posts I would save in a reference folder on my computer, (something I don’t do very often!) so it is gratifying to finally own a book of his. He is an excellent draftsman, and I’ve always enjoyed his colour choices. Droles de Pinup is not actually a comic book, but rather it is a series of gags illustrated with pinups of leggy beauties. If you like pinup artwork and especially if you like long legs, then this is the book for you. It can be bought at Amazon, or do what I did and buy it from the good Mr Herval himself on his website. 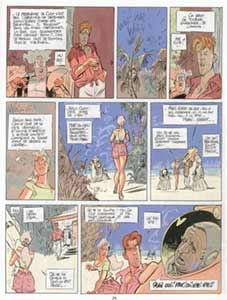 Thanks to Herval I also received a copy of Les Aberrants, a science fiction comic with art by the incomparable Belgian, Denis Bodart. Apparently this book was originally supposed to have been followed by a second volume, which unfortunately did not happen due to the poor sales of the first. I can’t imagine why this first book didn’t sell, it can’t be due to the marvellous artwork. If there was a problem with the story it will take me a while to get to the bottom of it, as I am currently crawling through the text page by page… (sadly, I can only read French with the frequent aid of a dictionary!).

Thanks to some recent correspondance with Philippe Nihoul, I learned that the latest book by Bodart (with story by Mr Nihoul himself) is a western called INDEH and is expected to come out later this year! Here below is a preview image from that book.

4 Responses to “some FRENCH books”