I was involved in BOTH! Which qualifies me (somewhat) to REFEREE the showdown:

In the left corner: THE REIGNING CHAMP, COMIC CON!

Rhode and I had realised long ago that there would be no time to do one of our Kooky “Booth-Themes” this time around. Even a silly idea (like last year’s YARD SALE) takes a few days of preparation but we live on opposite coasts now. We drove down to the show together on the Tuesday morning before Preview Night, having met each-other for the first time in months that very SAME morning. 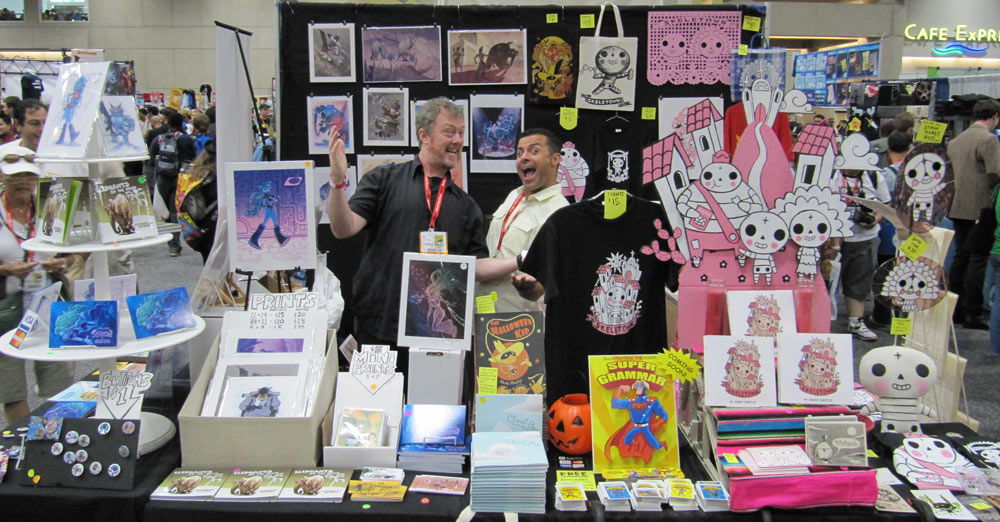 Prep-time being nil THIS year, we decided to actually display our stuff instead, which is a novel concept for us! Here’s the thing; sometimes those booth displays actually distract from the artwork. When you have a giant tin-foil robot towering over your booth there isn’t much room left to display prints and books! Despite last minute mini-drama, when we discovered that our trusty back-drape and table cloths had vanished from storage, a hasty trip to the fabric store saved the day, and I think we did a pretty good job of displaying our stuff, perhaps even the best we’ve ever done so far.

Rhode’s sales were his best ever! Despite high hopes, I sold only 1/3 what I sold last year. Having no new books may explain the downturn in BOOK sales but new PRINTS (and the best displayed range of designs ever) sold poorly too. Hard to explain why. We spend a lot of time behind the booth discussing such mysteries… Why does a slow-selling print suddenly sell out the next year? Why does a hot T-Shirt design go cold and then heat up again? Is it placement? Timing? Who knows? I guess the key is to always try new things and see what sticks, without getting so tangled in the SALES treadmill that you stop enjoying making the stuff in the first place.

Something new for me this year was selling little original framed paintings. Some came from my archives or sketchbooks, and others were painted while sitting at my booth.

What we took away from this particular COMIC CON is that we BOTH need to generate new material. New books, new designs and so on. Each of us definitely enjoys a show the best when we have a new book, even though the sales from those years aren’t necessarily the best. The satisfaction of having MADE something we are proud of always trumps sales. The other thing we talked about on the drive home from the show was the fact that we often decorate the booth but we have never done so to support any of our IDEAS. We have dressed as Car Salesmen or Robot men from the future but we have never decorated the entire booth in support of SKELETOWN or SEPHILINA and I think THAT is what we need to do next. Take it to the NEXT level.

**Funnily enough, even the vastness of Comic Con is but 1/3 the size of Japan’s COMIKET INDIE comic book show (IE; their version of APE!) which happens TWICE each year!!

In the RIGHT corner: The CHALLENGER, TR!CKSTER!!

Comic Con is, of course, THE definition of a comics convention, but Tr!ckster is a little harder to categorise. That is where the TR!CKY part comes in. (UN-conventional, you might say…) Tr!ckster is a bookstore/gallery/seminar, with a full bar on the side, but there are no booths and so forth. At least, that is what it looked like THIS this year. Who knows what size and shape it will take next time? Because part of the Tr!ckster concept is that it is a POP-UP event and will adapt to whatever space makes itself available. Sort of an indie-comics Halloween Super Store. With booze. Yeah.

Even though I was already locked into Comic Con 2011, having paid for my booth space a year before, I was very interested in the Tr!ckster project right from its inception. Namely, some anxious conversations several years ago about the NEW direction of Comic Con, which appeared to be moving away from its roots as a book show and steering in the direction of Hollywood (or perhaps E3).

And so, the conversations about an alternative began. “CREATOR CON!” became The rallying phrase for that growing community of people looking for something focused more strongly on the artists and writers who MAKE the stuff we all love. And now, a few years later, TR!CKSTER has grown out of that conversation. But what I think is significant about Tr!ckster is that it is only the beginning. Tr!ckster demonstrated last month that there was more than enough room in San Diego to have not only Comic Con but something ELSE as well.

My Time at Tr!ckster itself was sadly limited by the fact that I was committed to a booth in the nut-house across the road. But, during daylight hours, I was represented in Tr!ckster by my contribution to the Anthology book and my books & prints in the Tr!ckster store. In the evenings, Julia and I would go over there to hang out and, right from the get-go, I loved the feeling of the place. Personally, I liked it best when the mix of creativity, mingling and shopping was just-so. A Life drawing session jumping in one area, while other people hung-out in the bar to chat and then wander through the bookstore with a drink while meeting new friends. For me, that blend of people making art and buying it and/or networking was absolutely perfect.

A few nights later, when there was a rock band on site blazing away in full effect, I personally found it a bit too crowded and noisy… but of course I had just spent a wearying Saturday at Comic Con and had been looking forward to the mellow side of Tr!ckster that I’d enjoyed a few nights prior, so my opinion may not be typical of the majority. Everyone else certainly seemed to be enjoying themselves!

Being one of the few who exhibited at BOTH shows, There is an interesting comparison to be made between COMIC CON and TR!CKSTER in terms of sales, and it is not what you might expect. ALL my books sold better at Tr!ckster, where I paid no booth fees. That is a very sobering fact. When even my presence at Comic Con helps my books sell no better than at a store where I was not even around most of the time, it really highlights the notion that people at Comic Con are not there for books at all.

And the WINNER of the event IS… EVERYBODY!!

It was fun starting this post by casting Tr!ckster as an opponent to the huge Convention across the road, but it didn’t feel that way at the time. They are related but separate things. One is about spectacle and promotion, the other about creating and connecting. Julia said it best when she noted that Tr!ckster actually ADDED to the Comic Con experience, taking the comics-themed fun into the evening and giving us all one MORE reason to be in San Diego that week. In fact, I can see a time when San Diego in July might become a FESTIVAL rather than merely a convention, with events happening all over the city that week (or even that entire month?) There could be COMIC CON, TR!CKSTER and a multitude of other small pop-up events. I like that idea.

At the beginning of the CREATOR CON discussion, some envisioned a getting back to basics CONVENTION; a booth-based show that focused on artists the way Comic Con used to, 30 years ago. But the Tr!ckster guys decided to do something that would NOT be modeled on the classic convention format. Tr!ckster is very much artist driven but is something like an art SALON or gallery. Meaning that there is still room for more re-imaginings from other people if they want to do the leg-work. The Tr!ckster crew has shown the way; You don’t need to wait for permission to make the thing happen that you want to see happen! There will be room for other shows, possibly also happening concurrently with Comic con. I love it.

thanks to Julia Lundman, Tony Preciado and the INTERNET for the photos!

9 Responses to “Showdown on Harbor Drive”