I went to see the latest, and final, Star Wars film at a midnight screening in Oakland last night. My buddy Rhode had gotten tickets in advance, and got even more good-guy points by getting in line at 2PM and waiting in the rain all day, holding spots near the front of the line for me and his room-mate Mark. Obviously, the people prepared to line up in the rain for 10 hours are the hard-core true believers, suffering the drizzle and the occasional smart alec remark from the cooler than thou passers by. So there is NO WAY that they are going to have a bad time at that movie, no matter what happens. I couldn’t have seen this movie with a better audience, as I really ended up enjoying myself. 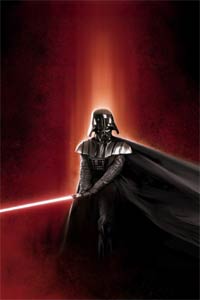 Towards the end of the movie, when the plot is getting intense, the film image froze on screen and burned. I thought the audience was going to go mad with frustration. A theatre employee had to get up on stage in the dark and explain the situation to a crowd of surly Jedi, who may have gone Sith at any second. There was a news crew there recording the event for posterity, so if his crowd control skills hadn’t been up to snuff, he could have been caught on tape being pummeled to death by tubby middle aged Obi Wannabes and half-pint Darth Vaders wielding plastic light sabers. Thankfully, nobody gave into the dark side, the projectionist channeled the force, quickly spliced the film together and we were back in the speeder-bike saddle and we rode it through to the end.

Afterwards we had to go get a slice of gomer pie and geek out on what we’d seen, which we did at Denny’s till 4 AM. We all agreed that despite some reservations, we had really enjoyed the film. It neatly wrapped up loose ends and joined the new trilogy to the old, and there is a much better portrayal of the character relationships than in the Phantom Menace or Attack of the Clones. I have no hesitation in saying that SITH is the best of the new three films, though some would say that isn’t saying much, as even die-hards like myself were disappointed by the other two.

I have some other friends who’d seen it before opening night at preview screenings and let on that they had not liked it. Perhaps their early negative reviews had lowered my expectations and allowed me to be pleasantly surprised, or perhaps it was seeing the movie surrounded by happy fans that helped me enjoy it. There is of course the possibility that it was actually a good movie… but more likely, the real reason that I enjoyed this movie was the fact that, like it or not, I am a Star Wars nerd and I’m prepared to cut these movies way more slack than I would any other franchise. 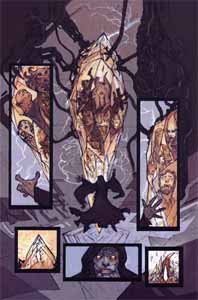 An added cool factor for me was having some friends involved in the pre-visualization phase of this movie. Derek Thompson and Mike Murnane, who grew up on the original three Star Wars movies have now designed creatures that live in the world that fed their imaginations as children. 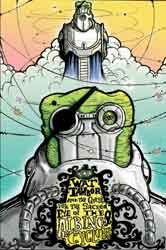 One of the characters Mike designed was based on a drawing he did as a child, which was actually done in an attempt to draw his own Star Wars character (I remember doing the same sort of thing when I was a kid). Years later, when working on Attack of the Clones he submits THAT character as a potential design to George Lucas, who chooses it from out of a bunch of other designs, and that character is in the movie. I mean, how cool is that?

And speaking of the pre-vis artists there is a comic book anthology out in stores now that features original stories set in the Star Wars universe developed by the concept art team. It is called VISIONARIES. Derek’s story is called SITHISIS and features the Emporer being all sithed out and creepy. Mike’s story features the character he designed WAT TAMBOR. One of the cool aspects of this book is that it is the only item on sale where the artist will get a royalty for sales. That isn’t the case with the “art of” books. So if you are going to buy one Revenge of the Sith art book,then this is the one to get.

The New York Post estimates that Star Wars fans skipping work to geek out will cost the economy over $600 million dollars, but that is a small price to pay for nationwide nerd-closure. Now that the Star Wars saga is finally finished I imagine that the fan-base will experience some post partum depression. There are some things you can do to hold off the inevitable deflation. You could buy yourself an X-Wing. Or take solace in the fact that someone is building a “Real” R2D2 in Italy.

2 Responses to “Revenge of the SITH”