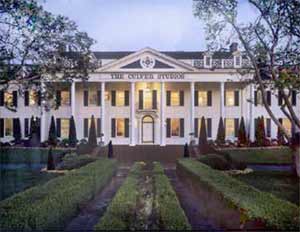 I am still working at SONY PICTURES, which is on the properties of what used to be called UNITED ARTISTS, MGM and COLUMBIA. One of the novelties of working at this particular animation studio is being across the road from a real Hollywood movie backlot, the CULVER STUDIOS, where a lot of classic films have been shot, including “Citizen Kane” the original “King Kong” and “Gone With the Wind”. Sometimes we animation geeks go to the backlot to have lunch in the studio cafeteria, where all the movie crews and movie extras get their lunch. (I guess the big wig directors and movie stars get fed elsewhere) Supposedly a TV show about LAS VEGAS is currently shooting and sometimes the cafeteria is frequented by extras dressed as dancing girls in skimpy costumes. So far I haven’t been fortunate enough to witness that spectacle myself.

This part of Los Angeles, known as Culver City, is where a lot of the earliest studios set up shop when LA started to become movie land in the 1920s and is consequently full of movie history. Not far away is the Culver Hotel, which was once owned by CHARLIE CHAPLIN and accommodated the midgets who were cast as MUNCHKINS while the movie THE WIZARD OF OZ was being filmed. According to the local lore they were a pretty rowdy and raunchy mob. Buster Keaton, Charlie Chaplin, Harold Lloyd and Laurel and Hardy shot many of their films in the streets around where I work. The HAL ROACH studios used to be nearby but I haven’t figured out exactly where yet. the TOM AND JERRY cartoons were made a few blocks away on another SONY backlot (what used to be the MGM lot).

Although I am slowly starting to find some of the charms that Los Angeles keeps so well hidden, my initial impressions of this town were anything but positive. The very first time I came to LA was as a tourist, years before I ever settled in the USA. I was visiting my pal TONY in San Francisco and we took a greyhound bus to LA, arriving at 5 AM at the downtown bus station in the heart of the notorious skid row; a place which makes San Francisco’s Tenderloin seem quaint by comparison. The scene around the LA bus station I will never forget. Bewildered foreign backpackers huddled within the light of the run down and filthy bus station, as a horde of predatory lowlifes swarmed around outside in the dark, like zombies on the make. We had to plunge into the seething filth and wade several blocks to connect with another downtown bus line, and I simply could not believe the desolate scene that we passed along the way. It was so decrepit, creepy and seedy that it could have been a scene from a post-apocalyptic movie, such as Escape from New York. But this was no movie set; it was a real place in the town where they make those movies. We passed buildings bashed to pieces, their scraps used to make bonfires that raggedy people hunched over in the morning cold. We were shadowed by a sinister little band of scumbags trying to sell everything from heroin to useless pieces of old bicycles. By that point in my world travels I was certainly no stranger to poverty and decrepitude, having spent several years traveling in a lot of the 3rd world. But that scene in downtown LA rates as one of the grimmest I have ever seen. 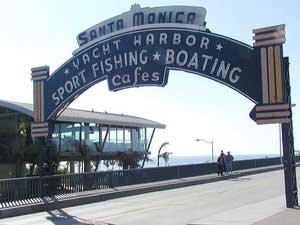 Consequently, the first time I ever worked in LA (about 10 years ago) I was absolutely dreading coming down here. My initial bad impressions had by then been fortified by years of living in the Bay Area, where one of the favourite pastimes is LA-bashing. Surprisingly, I enjoyed those several months in LA, but I think it was because I spent the whole time in Santa Monica, which is an easy part of town to deal with for those of us who cannot drive; there is a decent enough public transport system and there are several neighbourhoods were you can get around just fine on foot, which I did a lot of. I spent most of my free time walking around, because I didn’t really know anyone down here back then.

This time however, I have quite few friends living down here, mostly cronies from my years spent working at Colossal Pictures and ILM. Although quite a few of them used to participate in the LA-bashing game, they all seem to be living happily down here now, and in one case there is even some San Francisco bashing going on (“San Francisco is SO provincial”). Hilarious.

Along with Tony and Gale and old pal Anne, I went to see the Scottish comedian BILLY CONNOLLY live on stage in a one man show. He opened his act by addressing the issue of rampant LA-bashing, noting that he has never understood why everyone hates the place so much. Thereafter, he stood up and rambled on for over two hours in a shapeless but hilarious, meandering performance that was really no more than a long winding string of reminiscences and parenthetical observations evoked by those memories. Normally, I am a fan of these sorts of things having some underlying structure, but he made the whole thing hang together just through the force of his charming storytelling. I later found out that his show was different each night, but the performance I attended ended on the strongest laugh of the show. His story of the time he was trapped in a sleeping bag with a faulty zipper, along with a girl he had been planning to get physical with, but who was going into the tell-tale mini convulsions that indicate someone is about to puke… his description of his frantic, and futile, attempts to flee the scene had me laughing so hard that my face hurt. It felt like I had been sunburned.

Thanks to ANSON JEW, who kindly drove me all over the place, I was able to see some great art shows. This past weekend we attended the Society of Illustrators show, and the weekend before that we saw a MARK RYDEN show at a gallery on Melrose where they had some really huge paintings on display. The biggest of the paintings on show (pictured here) sold for $800,000. The brushwork and finish on these pics was really something to see. Many of them had some very elaborate and whacky custom built frames.

Then we went to La Luz de Jesus gallery and then on to Alhambra to visit the GALLERY NUCLEUS, which is actually a bookstore but with a good portion of the space devoted to art display. That night the place was jammed full of hipsters throwing money around, at a book launch by some of the Pixar crew. LOU ROMANO, DON SHANK, NATE WRAGG and SCOTT MORSE have just put out a book called THE ANCIENT BOOK OF MYTH AND WAR. I was happy to see them and some other Pixar friends who had come down for the weekend.

For my slice of LA outdoor splendor I made sandcastles on Santa Monica Beach with the daughters of my friends John & Carol, and last Sunday Anne introduced a group of us to the huge, yet lovely Huntington Gardens near Pasadena.

I am still trying to wrap my mind around what (or even where) Los Angeles actually is… but I have begun to see it as a group of smaller cities rather than one big one. This vast urban sprawl without a focal point is mostly bland and in many cases even downright ugly, but there is a lot of history and culture here if you know where to look. I am beginning to think that is a terrible place to visit but it might be not a bad place to stay, once the ground-rules have been figured out…

5 Responses to “Report from LA”