Yes! Rocket Rabbit is now a REGISTERED Trademark. Which means that he can not only throw a ™ around, but an ® as well. Which looks flashier on “cease and desist” letters. 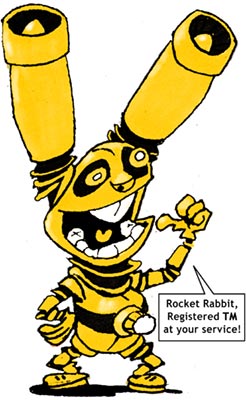 I had long ago thought it may be a good idea to protect the name of my favourite character, because it is exactly the kind of aliterative moniker someone else could easily hit upon for a cartoon character (or for that matter a vacuum cleaner). But, like a lot of my flashes of insight, that idea was put on the back-burner… Until I found out that somebody else WAS trying to register the “Rocket Rabbit” trademark for themselves a year or two ago.

So, Rocket had to fight what may have been his most dramatic battle ever, with the help of a fill-in sidekick called LEGAL EAGLE (as The Professor was away on vacation). Using my money as freely as ammunition, the two of them prevailed in the end and Rocket prevented someone else from sullying his good name. Then Legal Eagle registered the trademark, so now “Rocket Rabbit” is well and truly protected by an in-penetrable shield of legalese.

I offer this story to anyone out there who has contemplated getting a trademark for one of their characters, but has put it off because of the expense. It is true that it is a little pricey, but I can tell you that it is much cheaper if you don’t have to dispute some else’s claim first. You can file to register a trademark yourself if you want to save some money, but I was glad to have someone to help navigate me though the process.

I have also benefited greatly from my membership in the Bay Area chapter of Lawyers for the Arts. They have chapters all over California, where they hold frequent seminars on Intellectual Property Law and other issues of interest to artists, illustrators and musicians.