It is wonderful to see some European graphic novels being distributed in major bookstores in the US. I hope that they sell well enough to prompt more of the same in future… I mentioned Epileptic and Gemma Bovary earlier, and here are two more that are worthy of both your time and your money: 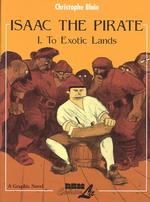 ISAAC THE PIRATE has come out in (so far) two English editions by NBM. Entitled Isaac the Pirate: To Exotic Lands and Isaac the Pirate: the Capital, both are written and illustrated by CHRISTOPHE BLAIN. Contrary to what is implied by the title, Isaac is in fact an artist. He has a lot going for him on land, namely a beautiful girlfriend, but nevertheless becomes restless and goes adventuring with a sketchbook under his arm. He goes to sea but once out of port he discovers that the ship’s captain is a pirate. In volume two Isaac finally gets back on shore, but once again gets involved with some shady characters; this time being some pick-pockets.

The artwork in these books is simple but deceptively so; the characters have a “cartoony” design but the linework is done with a more energetic and characterful brush line than you might expect. There is a fair bit of hatching and brushwork to give the drawings some volume and sometimes the dry brush is deftly used to show lighting. The story telling is done with an un-fussy panel layout of 12 to a page. I notice that French comics artists don’t get into the super crazy panel layouts that are popular in American comics or Manga. Even though I like the adventurous approach when it works, it often becomes distracting, unlike the straightforward page layouts and clear storytelling in these books. 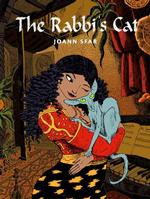 THE RABBI’s CAT is a 150 page full colour graphic novel, published by Pantheon (which is an imprint of RANDOM HOUSE) and collects in English the three albums originally published in French. It is written and illustrated by by JOANN SFAR, another one of the newly influential artists connected to the French publishing house called “l’Association” (David B and Lewis Trondheim being two other notable examples). I had heard about Joann SFAR from Sam Hiti who told me that if I like ISAAC THE PIRATE by Christophe Blain (and I do) that I might like SFAR. I bought this beautiful hardcover book on the strength of that recommendation.

The plot is mostly about the Rabbi and his daughter but that story is told from the point of view of the titular cat, who eats a talkative parrot and aquires the gift of speech. Before too long the cat is telling tall tales, asking difficult questions and engaging in metaphysical debates with his master the Rabbi. The musings of the cat are often funny, sometimes wicked, occasionally touching, and always engaging. His personality is the thread that we follow through the narrative in and around the Jewish community in 1930’s Algeria, where most of the story takes place.

The artwork is wonderfully loose; some panels have preserved the quick gestural quality of thumbnail sketches, and the drawings of the cat in particular are very expressive. The colour has been applied in flat swatches that make the panels clear and easy to read. This gives the artwork a pleasant balance between looseness and specificity, detail and clarity that I found exhilerating. Sfar seems to have pulled off that elusive goal of many comics artists: keeping the energy of the thumbnails in the final artwork.