Pint-sized Robotic crime-fighter (and sexy sidekick) to be represented by NERVE BOMB COMICS!

Already famous in their home town of SAN FIASCO for their flamboyant walloping of many a colorful villain, ROCKET RABBIT and THE PROFESSOR said at a press-conference today that the comics will bring their brand of goofy humor and gratuitous action to a wider audience. ‘We plan to TEAR the comedy/action envelope.’ Said Rocket.

Nicknamed ROCKET RABBIT by the SAN FIASCO city newspapers because of his rabbit-ear shaped rocket thrusters, the tiny robot is loaded up to (and including) his artificial eyeballs with supersonic, ass-kicking, laser-shooting high tech gadgetry. It is safe to say that more space was made in his design for crime-fighting gear than thinking equipment.

Due to his gullibility, ROCKET is always accompanied by his inventor and crime-fighting partner… THE PROFESSOR. Providing the brains and detective skills of the duo, the mysterious battle-babe’s plethora of gadgets and natural athleticism make her a formidable physical presence as well.

NERVE BOMB issue# zero (the premiere issue) features the first full tilt ROCKET RABBIT and THE PROFESSOR story in which SAN-FIASCO’s favorite heroes meet the attack of a 100 foot tall little old lady who is stomping the downtown. This issue also features a back up story: Los Troppo Drongos where a trio of quirky characters has a stream of consciousness romp in a land called Lunatopia.
————- 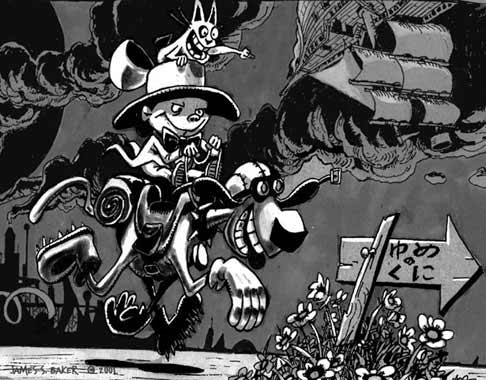 Spokesperson for NERVE BOMB comics, JAMES BAKER expressed excitement at promoting his new stars. ‘The adventures of ROCKET RABBIT and THE PROFESSOR are whimsical, a little rude, and have as many plot twists as we can get away with. Nerve Bomb comics showcase a lively collection of stories and characters, but being the work of one artist, they will retain a distinctive voice.’

Nerve Bomb is a 32 page B/W comic book quarterly (with a full color cover) created, and drawn by JAMES BAKER, and published by NERVE BOMB comics.