Some more drawings from a old stash of travel sketches. These are from Japan, 1987. 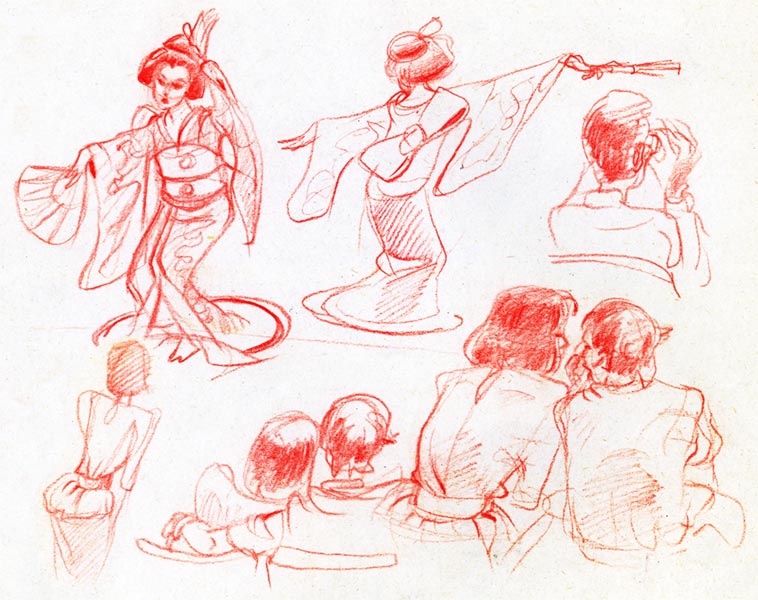 When I did these, I’d not been in Japan long, having just got off the ferry from Taiwan (via Okinawa) where I had been supervising animation layouts in Taipei. After a few hectic months of tropical heat and crazy Saturday-Morning animation production schedules down there, it was actually refreshing to be in the snowy, cool winter of Japan. It was especially lovely to have arrived to Tokyo in time for the New Year, which the Japanese do very nicely; many beautiful kimonos on display. I had not been prepared for the charming sight of Kimonos in the snow, thinking that was a thing of the past or merely a display for tourism pamphlets, but that’s exactly what I saw when I arrived. It was exciting; I had wanted to visit Japan for years, and in December 1986, I finally did. These first few sketches were drawn while watching a play in Tokyo. A friend I had made on my earlier Taiwan assignment, Sean Newton, was coincidentally working in Tokyo, and more coincidentally still, the studio he was working at was about 15 minutes walk from my guest house.

In a city as big as Tokyo, that was really remarkable luck for me to have a comrade so close by, and especially one who likes sketching so much and does it so well as Sean. We went out drawing the Tokyo sights together several times in my first weeks in Japan. I was in tourist mode, exploring Tokyo every day while Sean had to work, but we got together sometimes during his down time, for the occasional sketch session at Tokyo Zoo, or in this case, at the Kabuki-za Theatre in Ginza, which I have vivid memories of. We also did some sketching at a Noh play, which I’m told is the more highfaluting theatrical form, but the Kabuki was perhaps more spectacular and colorful, purely from a visual point of view.

Tokyo is one of my favourite cities to explore and get lost in, but eventually even I had to move on. I had a Japan rail pass burning a hole in my pocket, and had to use it or lose it, so I hit the road.