Many films that have recently inspired me (and my friends) have been from abroad (and not just old ones). A few are from countries whose film industries I was previously unaware of. Here are some (both sublime and ridiculous) that may be worth your time… 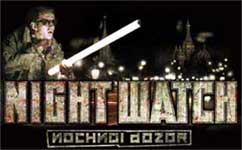 NIGHT WATCH is a Russian movie just being released in American theatres (just as the sequel is coming out in Russia) but I was lucky enough to see it on DVD in late 2004 via some friends who are hooked into the film scene abroad. It has provoked more excited discussion amongst my pals than any film since we first beheld the majesty of Shaolin Soccer.

The context for my first viewing of Night Watch was that a largish group of us were at Maverix Studios watching movies on their stylin’ video projector, it was late and we were getting ready to leave. Derek and Bosco said that they wanted to show us a sequence from another movie. We groaned; we were tired from watching a bunch of movies already. “Just the first 15 minutes” they said. We grudgingly relented and they played the film, and hit the pause button at the 15 minute point, as promised…. to HOWLS of protest from everyone present. We were all wide awake and on the hook now. We HAD to see the rest of the movie! That’s all I want to tell you about that film. If you don’t like the first 15 minutes (it’s not everyone‘s cup of tea) you may as well leave the theatre. On the other hand, if you like the first 15 minutes then hold on tight; this film is for YOU and it won’t let you down.

Some of my recent favourites have been from Korea even though I had never seen a Korean movie before 2004. When watching them I am on the edge of my seat at all times and have no idea what is going to happen next. Perhaps it is because Korean storytelling conventions are different (and consequently unpredictable to me) or perhaps part of the reason for these films’ impact is that I had not been exposed to any desensitizing hype?

OLD BOY is hard to describe without giving anything away. It would be criminal to expose the compelling plot or it’s weird twists and turns. The performance of Choi Min-Sik is absolutely superb; He’ll shock you, inspire your pity, disgust, and amusement… He’ll take you on an excrutiating emotional journey… it is a real workout, an emotional stair-master. There’s talk of an American remake of Old Boy and though the eagerness to mine the gold in this film is understandable, I cannot imagine it working as well as the original.

SAVE THE GREEN PLANET is another Korean Movie full of insanely intense emotional moments. Without spoiling anything, this film is about an eccentric trying to save the world. It will take you to weird and worrying places, and you’ll want to give your harried soul a warm bath when it’s over. At the mid point of this film, despite being absolutely enthralled, I had no clear idea of; 1) what was going to happen next, 2) what the film was about, or even 3) who I was rooting for, as all the characters were equally appalling and sympathetic.

From what little I know of the Robert Mckee ideas of story-structure, that should be a No-No; by the mid point of the film I SHOULD know what the film is about, who I’m rooting for, what his problem is and what he is looking for… But with many of these Korean films I’ve seen the story rules go out the window… but I love them.

JSA (AKA: “Joint Security Area“) takes place in the “no-mans land” between North and South Korea, and deals with the guards on either side who can clearly see the individuals on the opposing side of the border. In talking with Bosco about the moral ambiguities cleverly threaded into this, and other Korean films, we wondered if the complexities of the North/South split of that country may explain the ambivalent shadings of “good-guy” and “bad-guy” in some of the better Korean movies that we have seen.

Honorable mentions go to two other Korean films that I enjoyed, even though they were not as original as the ones already mentioned. “NATURAL CITY” has been described as a “Korean Blade Runner” in that it is set in a future where there are synthetic humans and the protagonist falls in love with a beautiful synthetic woman. “A TALE OF TWO SISTERS” is a gorgeously filmed taught psychological thriller with horror movie undertones (or is it the other way around?).

On my list of Korean films yet to see (recommended by John Stevenson, who turned us onto these films in the first place) are “SYMPATHY FOR MR VENGEANCE” and “A BITTERSWEET LIFE.” Those titles tell me to expect more mental punishment, Korean-style….

If you have a taste for something less high faluting (or emotionally harrowing) in a foriegn film, then you cannot falut any closer to the ground than “Turkish Star Wars” and “Turkish Spiderman” (AKA: “3 Dev Adam“). It is hard to find a “proper” copy of these films but don’t feel guilty for watching the grainy bootlegs (available for purchase on the internet) as the films themselves are hilariously bad ripoffs of other films. 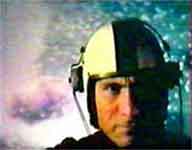 In “Turkish Star Wars” they have swiped entire FX scenes from “STAR WARS” (the real one) which cut the effects budget down to… about $4.95 (or whatever a “Star Wars” VCR Bootleg costs in Instanbul). In the space-battle scenes, a grim Turkish “space-pilot” sits, wearing a natty Vespa helmet and Walkman headphones, while the world famous “Death Star” sequence is projected on a wall behind him, scene cuts intact. 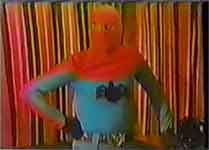 At least the producers of “Turkish Spiderman” shelled out the money to make their own Spiderman costume (complete with scary eyebrows on the outside of the suit) which is worn by a squat pear-shaped man who has the inspiration of playing Spiderman as a knife-wielding villain… The highlight of this pulse-punding epic is seeing a chunky Captain America and a flabby El Santo teaming up to fight villainous potbellied Turkish Spidey in some pretty vigourous punch-ups where all kinds of 1970’s furniture gets smashed. It is certainly a lot easier to get those cross-over dream-teams to work when international copyright law isn’t an issue…
————— 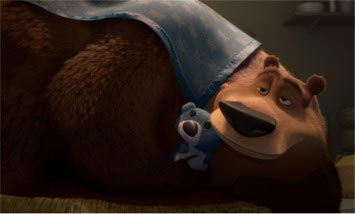 Still on the subject of movies, a yet to be released American cartoon this time, the latest trailer for Open season is online and getting a good reaction from most people, including righteous animal lovers and hunter haters. Check out this thread on an VEGANS forum. For contrast, see the indignation being hosed around in the hunters forum.