My Brother Jo and his family recently invited Julia and I to join them, and my Dad and his wife Wendy, for a holiday in Mexico. We’ve had a rocky time of things the past few years, and this was a wonderful opportunity to relax. Despite feeling ill the entire time, I did some sketching, and broke in a beautiful new sketchbook that Julia got me for Christmas a few years ago. 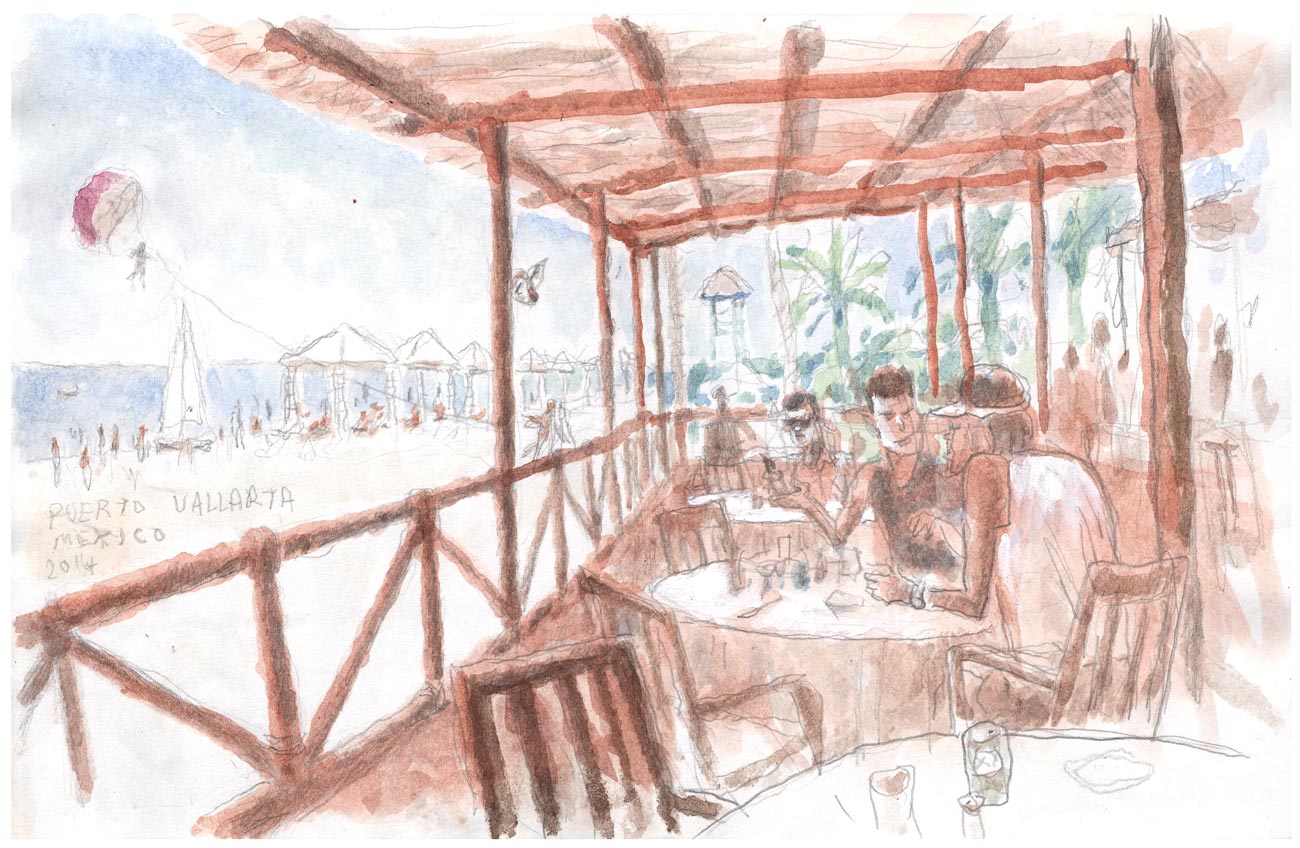 A few days before we were due to fly to Mexico, I came down with an asthmatic chest cold, and it was touch and go whether we would fly at all. The morning of our departure, I felt a little better and so off we went.. only to arrive in a Puerto Vallarta that was astonishingly hot and humid. Wow. I felt immediately drained by the brutal heat and felt sicker almost as soon as we checked in to our hotel. The next morning, a doctor came to visit me in my hotel room, diagnosed me with Bronchitis, and pumped me full of antibiotics. This certainly helped, but didn’t heal me 100%. In fact, a few days ago I was put on another round of antibiotics here in the USA. 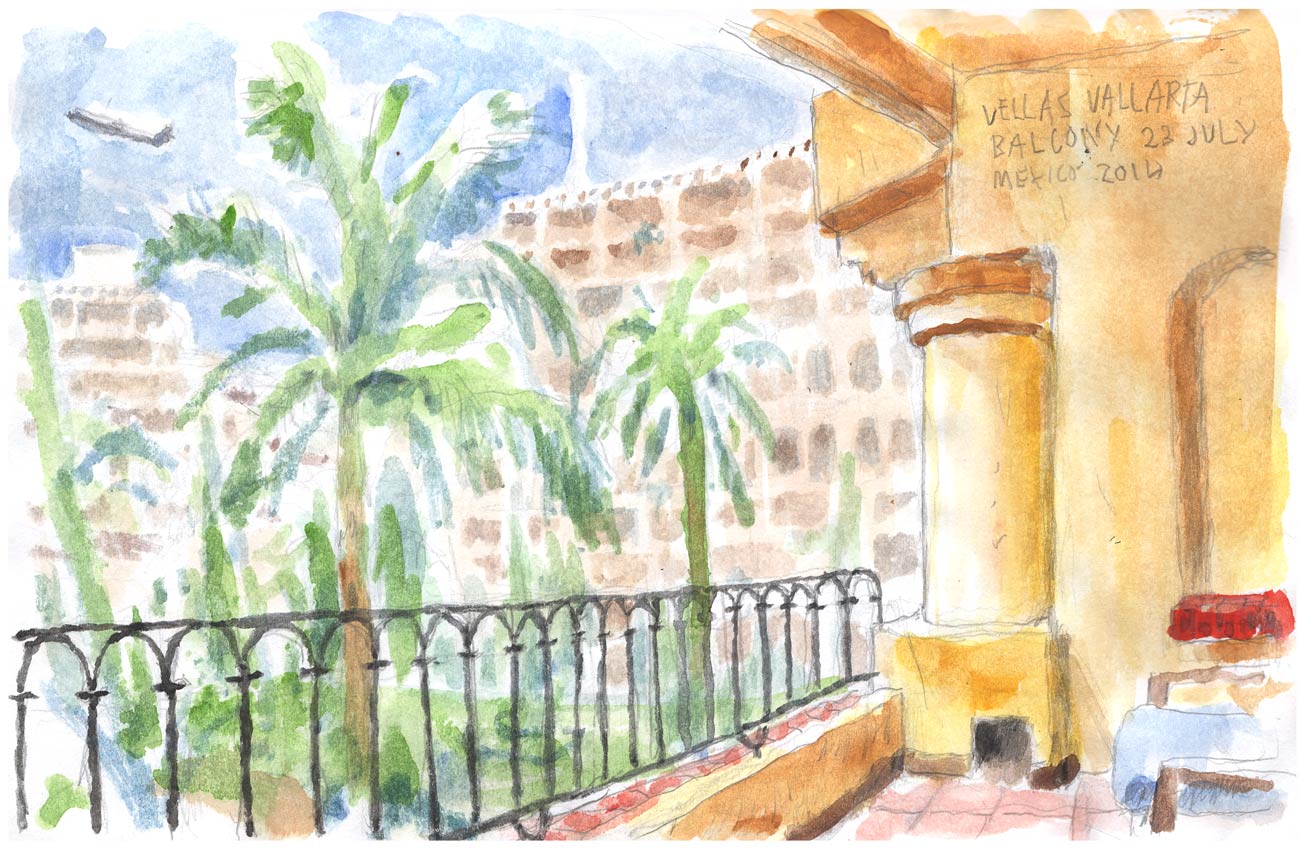 Unfortunately, being sick, my sightseeing was confined to the hotel itself, but I was very happy to spend time with my family, who I do not often see.  While the others would go off on tours, I would draw in the hotel or try to sleep off my chest-bug, and it was lovely to see my family each evening for dinner. On about the 3rd day, there was an absolutely spectacular lightening storm and the torrential rain on that and a few subsequent afternoons thankfully cooled the temperature a great deal, making the trip much more pleasant. Just as I started to feel a bit more human, Julia got the bad news that her division is to be closed and she will soon be out of a job. I’m not sure why it is so, but all of our attempts at holidays in the past few years have been fraught with illness and bad luck, and I’m afraid of what this Holiday Curse will escalate to next. 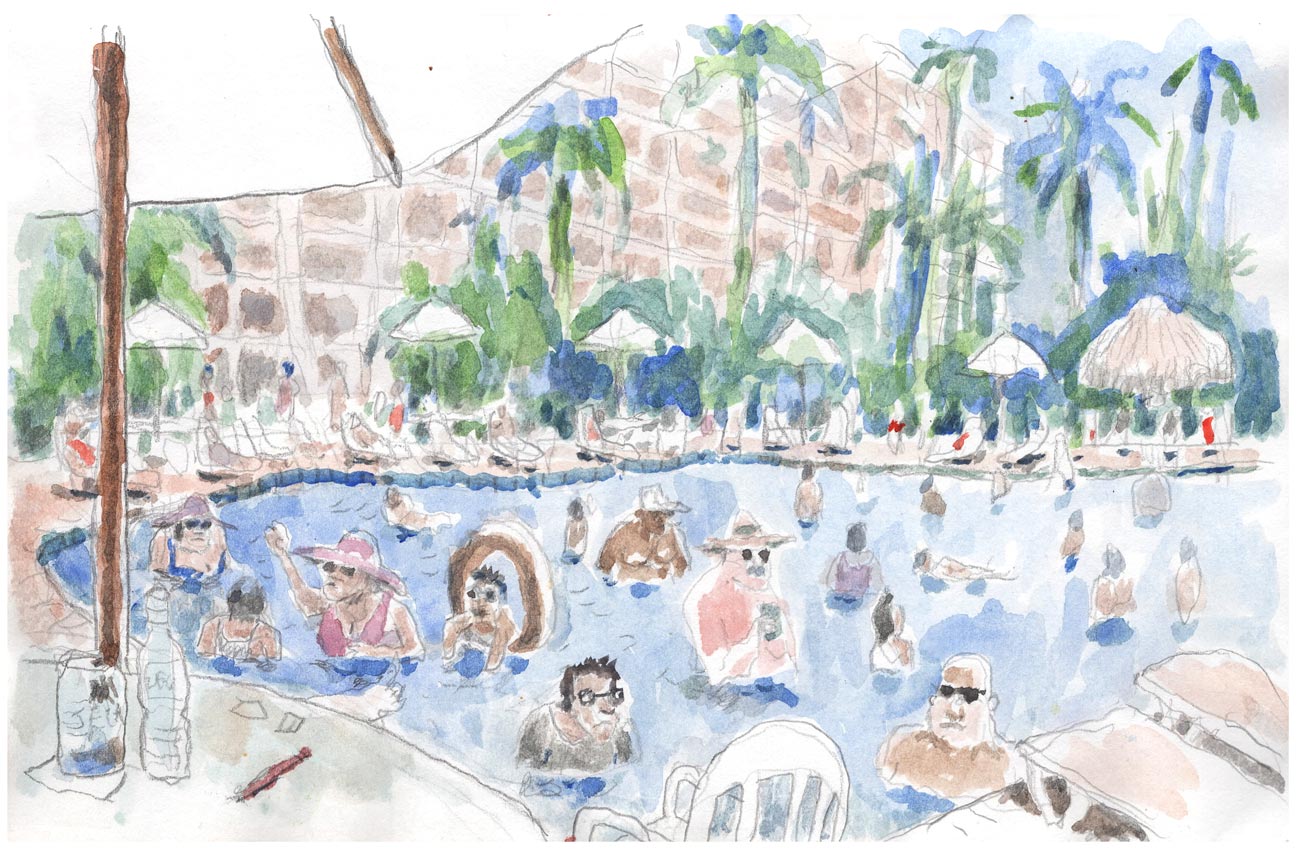 I had visited Puerto Vallarta once before, in 1989, and I remember a quaint little seaside town of cobblestone streets, but sadly this time around I only got to see the grounds of the hotel, and the nearby beach, because of my illness. The nexus of the hotel was a huge network of swimming pools, some with a bar right inside the pool itself,  blasting Euro-beat rave music around the clock. We favoured the much quiter family pool, which was a new concept for me; I’m used to the kids area being rowdy, but at this hotel it was the grownups who were the boisterous ones. (Must’ve been the Magaritas). 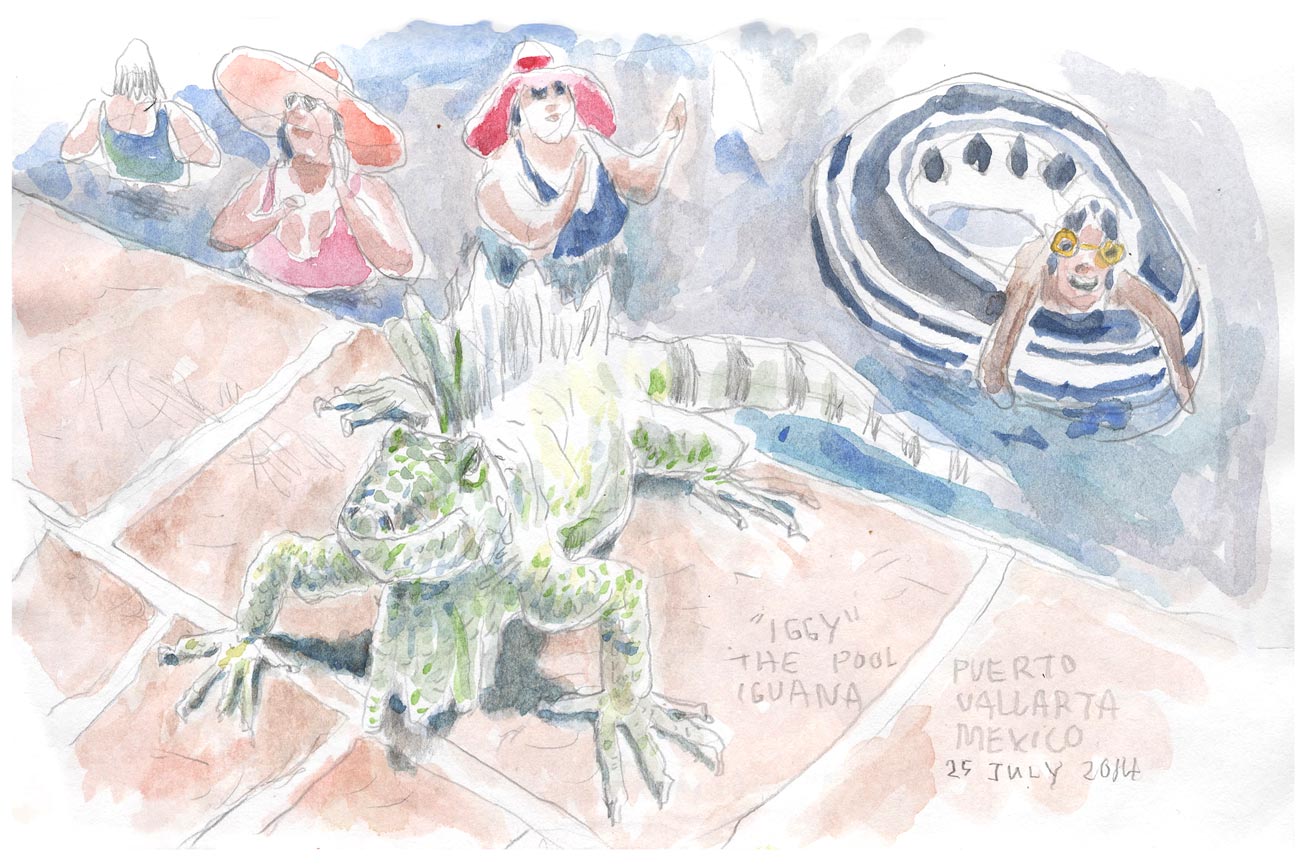 When we finally found a spot to sit poolside (where chairs are jealously guarded) we met one of the pool regulars; the POOL IGUANA. I’ve exaggerated his size here, making him look as big as a crocodile, but although he was not that big, he was surprisingly large; at least as big as a medium sized dog. It was quite a surprise when we finally nabbed a poolside spot to have this guy dive into the pool, and make a beeline for us through the water, crawl out of the pool and panhandle us for snacks. (For the record, he liked guacamole and salsa but declined our offer of “Fruit Loops”). 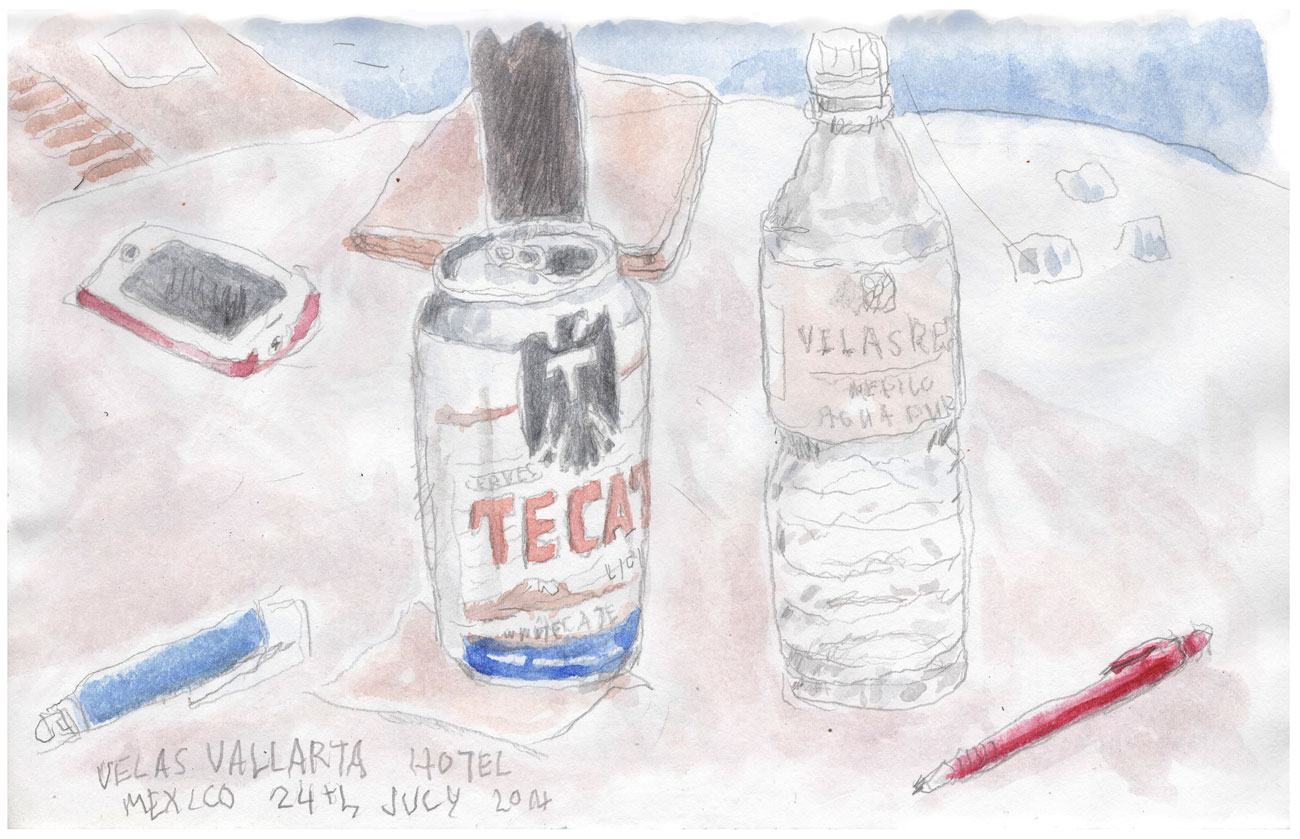 The Iguanas were not the only colouful wildlife. There were many racous screeching birds, most notably the PEACOCKS. I did not think to sketch them, but they kept up an almost constant squawking, day and night, reaching a frenzied pitch during the thunderstorms, when I think they lost their tiny feathered minds. They had the run of the place, and their favourite trick was to walk up and snatch the BUTTER off your breadroll right under your nose. BRAWK! After that first night, we always chose a table inside the restaurant. 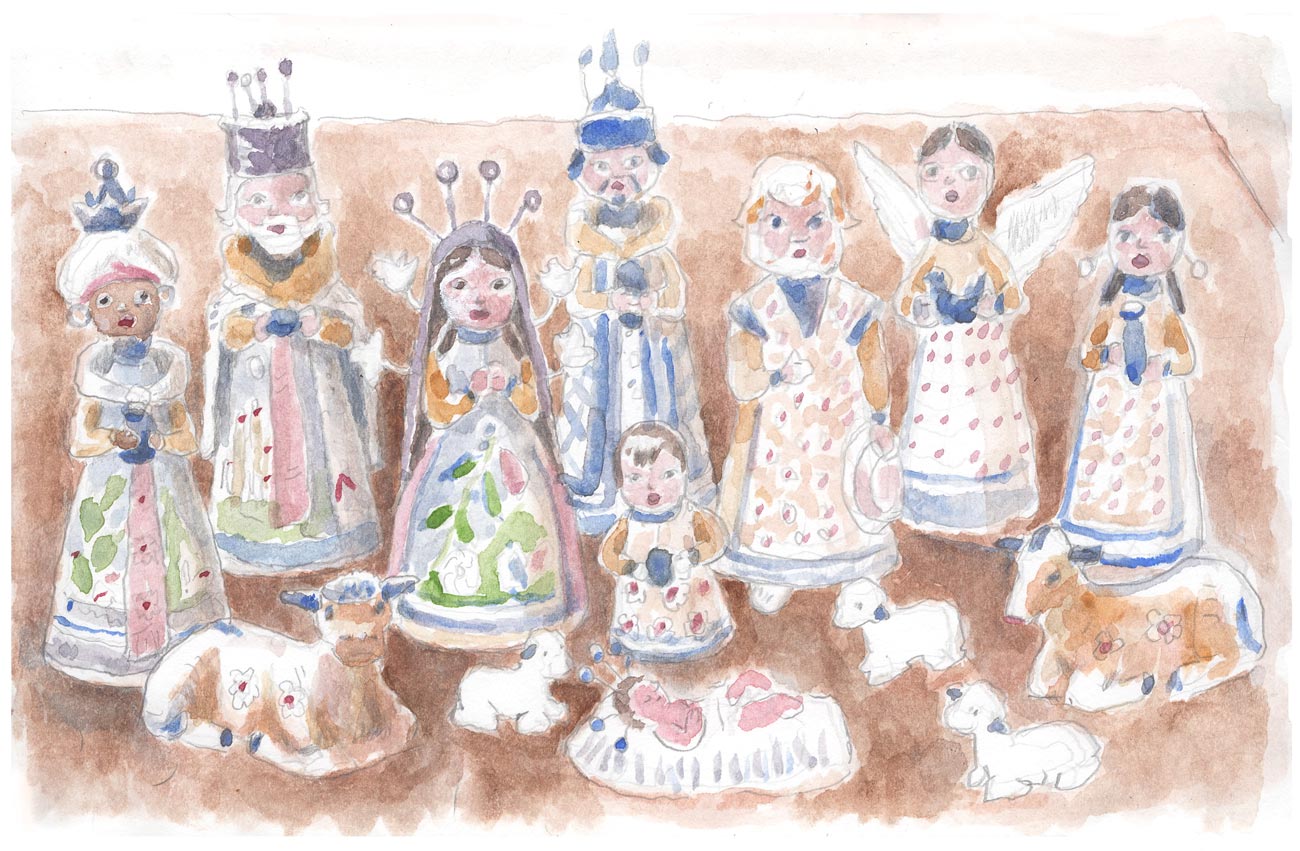 On one of her visits to town, Julia found a pretty little figurine. When she bought it, she found out that it was the MOTHER MARY figure of this Nativity SET. We didn’t have room for this many dolls, either in our luggage or our flat, so we gave the set (minus Mother Mary) to my Dad and Wendy (they planned to have one of the other female figurines stand in for Mary). I decided to sketch the nativity group before they were bundled up for their journey to Australia.

Christmas 2012, Julia got me these two beautiful leather-bound and monogrammed sketchbooks, but I didn’t feel capable of doing them justice until recently, as I lost my drawing ability the day after I was given the sketchbooks, when my right hand became paralysed. Although my drawing skill is still not where I would like it to be, after filling a big sketchook with left-handed doodles and drawings from life, I now feel ready to crack open these handmade beauties and do some drawing in them. The pages are about half the dimension of my previous sketchbook, and therefore the drawings in these will probably be more gestural, and hopefully looser, more stylised and ‘cartoony’ than the painstaking drawing I’ve been doing lately.

I look forward to filling them both up.