I have been working here in Portland, off and on for the past few months, and on Monday evening I was lucky enough to attend an early screening of the forthcoming new film from LAIKA studios; Henry Selick‘s CORALINE, which is a retelling of the book by Neil Gaiman. I had nothing whatsoever to do with the production of the film; I just happen to be working at LAIKA at the moment, so it was strictly a case of being in the right place at the right time. 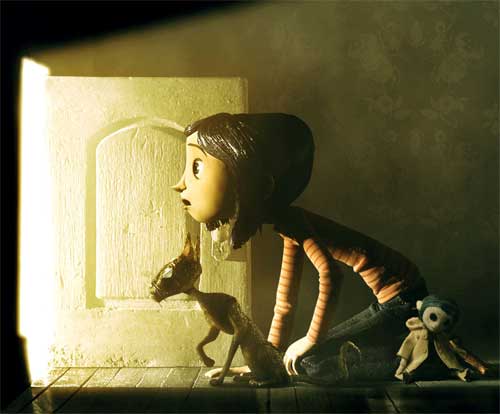 My my my, what a treat it was. I think that this is an absolutely fantastic movie.

It is a wonderful debut film for a new animation studio because it absolutely requires that you take it on its own terms. It isn’t a Pixar wannabe, a Disney wannabe or a Dreamworks wannabe… Other new studios have made the copycat mistake with their first forays into animation, but this film asserts itself, and Laika, as its own thing. Coraline is strange, creepy and beautiful in a way that you wont see in other big budget animation. Some of the character designs alone would never even have gotten off of the drawing board at other big studios I have worked at. For the first few minutes, I was instinctively comparing the film to the “template” that is used for these things; the opening sequence, the pacing, the inciting incidents and all of that stuff… but after a while, when I realised that Coraline was going about it in her own way, I stopped comparing, and let the film be what it is…

Before the screening, I knew next to nothing about either the film or the book, except the basic premise; a variation on a “through the looking glass” story, where a young girl finds an alternate version of her life beyond a doorway in her family’s new home. There seem to be many such stories in English children’s books (The Lion the Witch and the Wardrobe, Alice in Wonderland, The Golden Compass and so on…) but in this version, the setting is the Pacific Northwest, where the film was made. Recognising a stop-motion, cartoon version of misty Oregon, where I am working now, was one of the many pleasures of seeing the film for me.

Of course, knowing very little about a movie is the best possible way to view it for the first time; absolutely expectation free. Because of that fact, I am loathe to laud this one too much for fear of over-selling it and spoiling the experience for others… and there are surely aspects of the film that may not appeal to everyone… even though they appeal to me… let’s just say that I strongly urge fans of animation, fairytales, or gothic children’s literature to see this creepy, magical wonder. I also encourage you to make the effort to see this film in 3D, which works spectacularly well in the stop motion environments.

The film opens everywhere on February 6th and I encourage everyone to see it; it isn’t like any other animated film you will see soon. It has a pacing, rhythm, tone, style and look unlike most anything else that you’ll find out there. While it has something in common with Henry Sellick’s earlier films it is even different from those too. I hope this film does big enough numbers at the box office so that more films like it can be made in future.