Over the past few months, I have formulated a bunch of ideas for mini-comics and longer stories, all in various stages of completion. Just last week it occurred to me that I needed to get something in production for APE. Here is the KAT & TELLY mini comic I made for this Year’s Alternative Press Expo, which happened this past weekend. 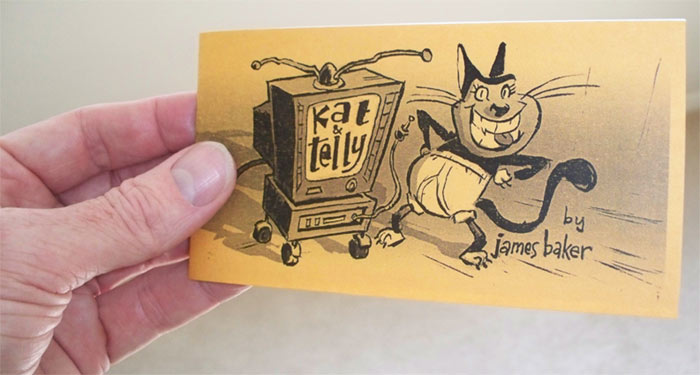 After a few days of wondering which idea to actually do (a common problem for me) I started drawing KAT & TELLY in earnest on Tuesday morning (based on some drawings and ideas that had been frying in the brain-pan for sometime) and finally finished the last drawing in the wee small hours of Saturday morning. I had intended to print the books myself at home but, as the sun rose on Saturday morning, that plan was aborted due to yet another bout of printer trouble (the combination of a prima donna printer and a procrastinating cartoonist has been fatal for many CON projects in the past).

Thankfully, I was able to run down to the copy place a few blocks away, and get this mini printed out in a matter of minutes (on my own paper) and then hop a cab to the con, where folding and stapling completed the package in time for the minis to go on sale at 11 am.

This year, Rhode was unable to be a part of the show as he is out of town. However, he had already left a stash of his product at my place here in SF and I was able to load a stripped down inventory of both his and my stuff onto ONE luggage dolly and get it all to the show myself. Rhode’s pal Paul was able to help out with manning the booth.

UPDATE:
the book itself is online HERE: