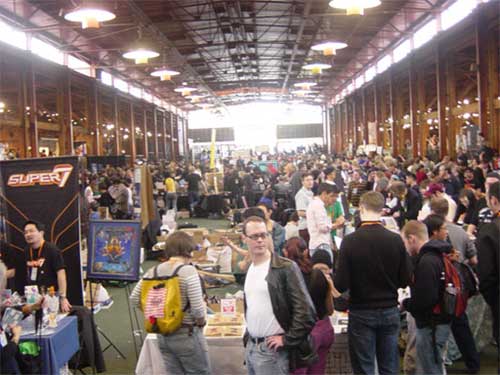 Even though I spent most of the time at a table hawking my wares, I was still able to find a few gems at this years ALTERNATIVE PRESS EXPO. The debut of the 2nd FLIGHT anthology was a very big deal, and this book is certainly thicker and perhaps even better than the first, so the Flight booth was continually packed with buyers. After the success of the first book, which was launched by a group of relatively unknown but supremely talented folk who for the most part met via the web, lots of more established artists are scambling to get on board… It is an inspiring project anyway that you look at it. 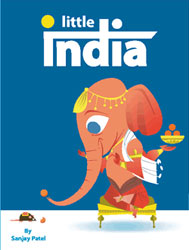 But my favourite book of the show was LITTLE INDIA by Sanjay Patel. It is hard to do justice to the charm of this book in a simple verbal description, but here goes: it is an introduction to the pantheon of Hindu gods drawn in a fun and graphic art style and rendered in a palette of tasty saturated colors. It was self published and only 500 copies were made.

Given that Sanjay sold around 100 in only two days at A.P.E. my guess is that the rest will go fast… so perhaps you should get in touch with him at his new website www.GheeHappy.com

and line up a copy for yourself. Seeing this book makes me wonder if there’ll be any follow up editions featuring OTHER pantheons; Greek and Roman gods, Buddhist gods and so on. The monotheistic religions (Christianity, Judaism, and Islam) wouldn’t lend themselves too this treatment as there would only be ONE page in each book and that just wouldn’t be as much fun…

Sanjay was sharing a table with the mighty Louis Gonzales who had his recently printed, and very wonderful sketchbook, DUMPING GROUNDS on sale.

I was also lucky enough to be visited at my table by KAZIMIR STRZEPEK who swapped me some of his comics for some of mine. For my part of the bargain I scored the second issue of his neato MOURNING STAR mini comic and a thick collection of his SPAZ strips. 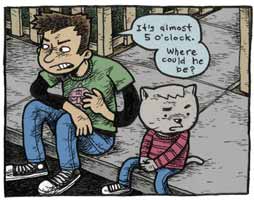 I had come across a copy of MOURNING STAR number #1 at last years Comic-con in San Diego and it was one of my favourite finds of that con. It is a kind of Sci-fi fantasy story that takes place in a kooky world, peopled with a lot of whimsical characters.The SPAZ strip on the other hand takes place in a more recognizable world and deals with 3 room mates, one of whom is a cat. It’s more of an ODD COUPLE (Odd Triple?) kind of story. Kaz has an appealingly grungy art style with a lot of stippling and hatching, and he gets some great expressions from his characters. If mini comics are your bag then you should email him .

Benton Jew and Anson Jew also had some minis on sale, including Benton’s YETI HUNTER which was done as part of the original 24 HOUR COMICS endurance event. Anson’s new Film Noir-ish mini is called VICE which was fleshed out with greyscales and actually clocked in at 48 hours…. (what a dawdler…) Both were very impressive.

Speaking of mini-comics, Saturday Night was spent at the ISOTOPE for the annual mini comics award show. it’s the Oscars of mini-comics…